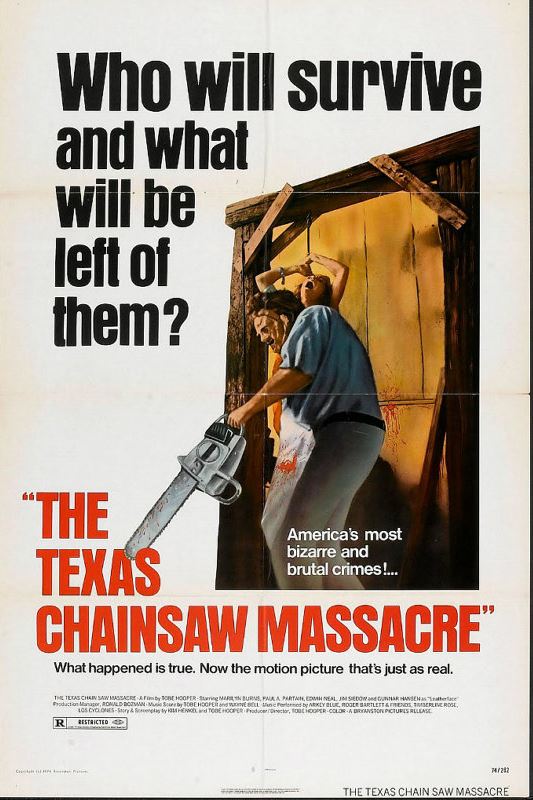 With Leatherface himself, Gunnar Hansen, gracing us with his unholy presence at CT HorrorFest 2015,  it provides us with an opportunity to feature a really cool piece of Texas Chainsaw Massacre history.  And let’s face it…..in the world of vintage horror collectables, few film franchises can challenge TCM for the crown.  Original movie posters are the ultimate collectable….they can be hoarded and looked at as an investment or they can be framed, hung, and viewed as a hip piece of pop culture art.  The iconic image of Mr. Face O’Leather revving up his murderous toy with a screaming, hanging co-ed in the background surely leaves an impression forty years later, and now it can leave an impression on your living room wall.  Right now, Etsy is featuring a vintage cinema poster that, overall, is in pretty good shape.  While it may be too late to pull the trigger ($45.95 plus shipping) and get this in front of Gunnar at CT HorrorFest for his signature, it’s still an awesome buy and an important piece of horror history.

As evidenced by the buzz they created with their San Diego Comic Con “exclusives”, NECA Toys always seems to be one step ahead of the rest.  Back in 2003, they released series 1 of their action figure line from the Hellraiser movie franchise.  These pieces featured six figures with McFarlane-esque level of detail and articulation, and served its purpose in letting the rest of the horror toy bigwigs know that they were a toy company force to reckon with.  In a move to foreshadow what a pop culture behemoth the con in San Diego would become, NECA announced the Series 2 lineup at SDCC 2003 ahead of its Halloween release.  Doug Bradley, more famously known as Pinhead from the film franchise, will be a special guest at CT HorrorFest 2015.  How cool would it be to have the man himself sign any of the various Pinhead versions and variants from this classically-current line?  There is an auction on EBay right now, featuring a mixed bad of 12 carded Hellraiser figures from series 1-3.  If you’re looking for a quick shortcut in starting a collection, this is a great starting point.  And for $10 a figure ($120), the price is right.  The (toy) box….you opened it, we came.