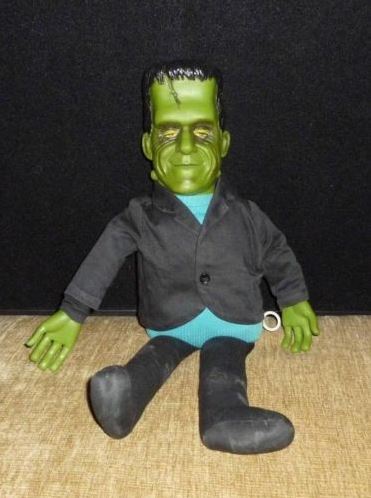 Welcome all to the latest installment of the world’s most riveting and significant column in the horror geek universe, Horror Hunting!  In this edition we’ll examine in-depth one of the original scary monsters in literary and film lore, an iconic ghoul that was at the forefront of the undead revolution. Of course, it’s none other than the Frankenstein Monster!  Throughout the decades, Frankie has been depicted in various forms and images in movies, books, comics, television, nightmares…..you get the picture.  Lined up in this installment we have two classic and pop-culture relevant toys that would make Mary Shelley jump in the air with excitement.  Maybe she wouldn’t be that crazy, but you should be…..

Has there ever been a product or work of art or piece of media that contained the familiar moniker of “Munsters” that didn’t rule?  The answer is hell no.  The Munsters, even 50 years later, invokes a special type of horror nostalgia and recognition that has persevered well past its original 2-season run on TV.  Like Star Trek, the series’ loyal fans never let the show and its characters fade away.  In fact, they thrived.  Enter the patriarch of the ghoulish clan, Herman Munster.  Obviously based on Shelley’s creation, Herman (played brilliantly by Mr. Fred Gwynne) bumbled his way through a suburban existence with his equally-monstrous family members (except for Lily’s niece, Marilyn, who’s “unattractive” appearance is reminiscent of The Twilight Zone’s clever paradox “Eye of the Beholder”).  During their original series run (1964-1966), The Munsters were also one of the first shows to have an extensive line of merchandising for public consumption.  Lovers of vintage horror toys will find perfection with this original 1964 Talking Herman doll from Mattel.  Buy it to bring a smile to Herman’s face (and don’t you just love to hear him laugh)?

The horror gurus over at Mezco are offering a cool Frankenstein figure (with the ever-jazzy “Limited Edition” tag) together with a bad-ass piece of The Mummy (Black and white Variant…..yet another buzzword to get the toy collectors salivating like Cujo).  This combo will only be available for in-person sale at this year’s New York Comic Con, but those lucky Gothamers aren’t the only ones that have a chance at these figs.  You can grab yours now from the Mezco Toyz website for only $90.  While you’ll have to wait until mid-October to receive your prize, it’ll be worth every minute of it.  Grab yours now before they sell out.

NECA Scares Up Figures From Rob Zombie’s ‘The Munsters’