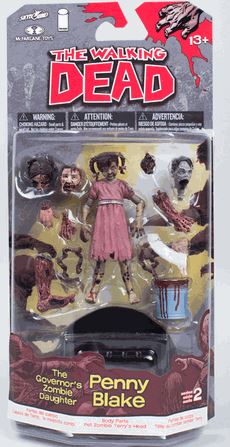 Welcome to another installment of Horror Hunting!  We’re barreling towards spring, as the ice begins to thaw and the snow begins to melt.  It’s yet another reminder that horror convention season is almost upon us.  This week we’ll take a look at a classic horror board game released in the year of my birth, along with a piece from a current TV, comic and collectables juggernaut.  Monsters and zombies and conventions, oh my!  Let’s get right to it….

It’s been a while since I’ve promoted something from Mr. McFarlane, who I consider one of the great comic, horror and action figure geniuses this mudball called Earth contains.  He began illustrating Spider Man, created his own series called Spawn (you’ve probably heard of it), and had the foresight to realize the ridiculous potential in the action figure market.  He quickly arranged deals with all of the major professional sports leagues, along with various comics, television and film studios.  Twenty years later, he’s earned a license to print money in several various realms.  Here’s a cool figure that’s probably been overlooked.  McFarlane has an exclusive deal to create action figures based on The Walking Dead, both the comic and TV versions. As you’d expect, these have been somewhat of a hit with their grittiness and realistic features and gore.  Though The Governor has been gone from both pop culture versions of the storyline, his influence remains.  Check out this figure of his daughter Penny….you know, the little girl zombie he kept chained up for sentimental and psychotic reasons.  Complete with severed limbs in a trash can and the infamous fish tank full of decapitated zombie heads, this figure is truly spectacular.  Own it now for a very reasonable price.

For the vintage collectors, here’s a classic board game that’s sure to bring back some terror-filled memories.  If you’re not a collector of vintage horror toys, and weren’t aware that “The Monster Squad” was more than a fabulous ’80s flick, here’s a great piece to jump-start your collection.  Based on the TV show of the same name, this game features some old-school horror heavyweights (Dracula, the Frankenstein monster and Wolfman!).  It’s in good condition, and the price is reasonable ($45).  Get it to see if Wolfman DOES have nards…..wait, wrong Monster Squad.  Well, get it because it’s a killer game that’ll stand the test of time.