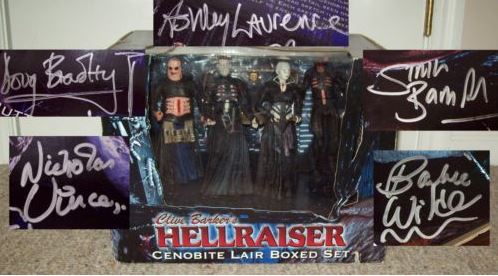 Back from a brief hiatus, welcome to the very first installment of Horror Hunting! for 2015!  In case you haven’t heard, the second annual Connecticut HorrorFest will be emanating from the Matrix Conference Center in Danbury, CT on July 18th, 2015.  In honor of the first two horror superstar guests that have been announced, Doug Bradley and Gunnar Hansen, in this edition we will feature cool relics from their
respective film franchises.  Don’t forget to mark your calendars, because we’re only six short months away from the coolest and most important horror con on the east coast!  And away we go……..

I’m an action figure guy at heart.  They were always my favorite kind of toy growing up with Star Wars, GI Joe and Transformers, and it continues today with basically anything Todd McFarlane decides to put out.  Currently on EBay is a boxed set of the Cenobite Lair from Hellraiser, autographed by all four of those rascals (including Mr. Bradley) as well as Ashley Laurence.  What makes this item exclusive is that NECA only released this set through Spencer’s back in 2005.  Included in the box is a Pinhead sketch signed by Clive Barker himself.  Pretty cool stuff.  It’s rather pricey at nearly $400 (free shipping!), but it’s a borderline must-have for any horror toy collector.

The wunderkinds over at EBay bring us our second entry in this column, which is a very rare set of theater lobby cards from the 1974 release ofThe Texas Chainsaw Massacre.  Original lobby cards are very valuable, as many collectors prefer them to the movie posters due to their condition — the cards were not nearly as ripped up and faded as their window-hanging counterparts.  The set consists of 10 cards, 8X10 in size, each depicting a familiar scene from the iconic slasher film.  Oh, and it’ll help if you’re from France because these cards are in French.  Sorry if I forgot to mention that…..but these are cool all the same.  Definitely would be killer to walk up to Gunnar on July 18th and hand him one of these babies to sign.  You might score some brownie point, and it MIGHT just save you from the wrath of Leatherface.