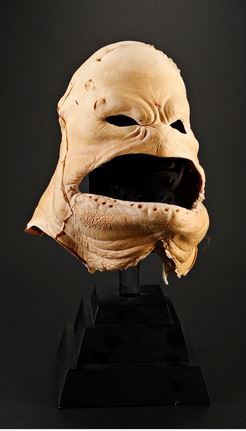 Welcome to the final installment of Horror Hunting! for 2014!  It’s been a great year for HNN, with the continuing domination of reviews, original articles and columns, interviews, and of course the first ever CT HorrorFest!  As we look back on a successful 2014, it’s only right to expect even more from 2015.  For the last time this year, here are two killer items for all horror collectable junkies to salivate over into the new year.  Enjoy!

The 2012 horror blockbuster The Cabin in the Woods elicited many, varied reactions and reviews across the blog-o-sphere, including from within our own site (right, Rob and Larry?).  But there’s no denying that this film did provide a unique perspective on what begins as a run-of-the-mill horror film.  The stars of Cabin are undeniably the murderous “options” kept in the glass cubes until called upon to do their thing.  There was an enormous tarantula, a scary little ballerina, and my favorite, the rip-off Pinhead (among others).  One of the monsters that has a teased appearance is the “Mer-man”, a Creature from the Black Lagoon-like killer that emerges from the depths of the muck to wreak havoc.  Right now over at Prop Store, you can own an authentic, unfinished Mer-man mask designed to use in the production of the film.  This original prop from the movie will set you back a pretty penny ($595), but luckily for you (and your sleep patterns) the sharp teeth and creepy eyes are not included.

If you remember Leo Gorcey and The Bowery Boys, then you’re waaaaaaaaaaaay before my time.  But I do know a thing about Old Hollywood, a glorious time when monster movies were taken as seriously as Gone With The Wind and Casablanca.  Okay, maybe not quite that serious but enough to garner quite a large niche audience and produce collectibles that are still sought-after to this day.  Back in 1949, the comedy-horror film “Master Minds” played like a poor man’s Abbott and Costello Meet Frankenstein and was only a year removed.  In fact, this film’s monster is played by Glenn Strange, who portrayed Frankenstein’s monster in the Abbott and Costello classic as well.  Even if the movie might not be up to par based on today’s cult standards, an original lobby poster (which would be hanging in the lobbies of movie houses across the country as an advertisement for the film) is still a really cool piece of horror history to own.  Get it framed, and it’s suitable anywhere in the house.  At only $50, it’s worth the effort to gobble it up now.