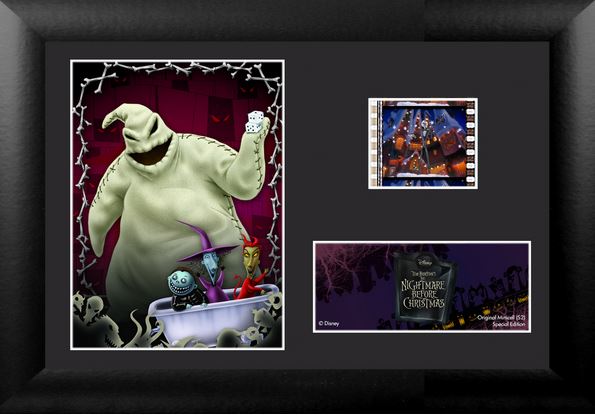 Welcome to the Christmas 2014 edition of Horror Hunting!  This week, as we indulge in suicidal shopping trips to the mall and excessive viewings of Scrooged and Christmas Vacation, let’s not forget about the horror element that’s so prevalent throughout the holiday season.  Movies, toys, family gatherings…..the holidays are filled with enough terror to make Charles Dickens blush.  In this edition we’ll take a look at a couple of cool pieces of memorabilia tied to iconic Christmas horror movies, one for the premium crowd and another for the Tiny Tims of the family.  While we patiently wait for the magic man in the red suit to squeeze down our chimneys, check out these potential gifts that any horror fan would love to find under their tree on Christmas morning…..

An animated darling of two important holidays (Halloween and Christmas), Tim Burton’s exquisite gem The Nightmare Before Christmas proved to be a crossover holiday hit.  A favorite of children, adults, and freaks in general, this fun film from 1993 still inspires a long list of merchandise, including action figures, clothing, furniture and decorations (among others).  Perhaps the character most closely associated with the horror genre would be the big boy baddie Oogie Boogie, the mastermind behind the diabolical detainment of Santa Claus.  If there’s one character that’s worth collecting from this movie (well besides Jack Skellington…and Sally…..and of course Lock, Shock and Barrel…well, I guess they all pretty much rule), Boogie fits the bill.  Wayfair currently has a badass framed film cell collection on sale, featuring the big guy and the three little trouble-makers (complete with a letter of authenticity).  Priced at $29.99, this is screaming “buy me”.  Check it out:

I’m ashamed to say that I had not ever viewed the classic Christmas horror flick Black Christmas (also known as “Silent Night, Evil Night”) until just a couple of years ago at Hudson Horror 6.  Considered by many to be the true genesis of the slasher genre, Black Christmas was influential enough to spawn several imitators and a 2006 Hollywood remake.  While it may be considered slow by today’s standards, this film nonetheless blazed a wide trail for what could be called the golden age of horror films (the 1970s).  Want to own a piece of the original magic?  Be prepared to shell out some big bucks.  EBay has a listing for 8 of the vintage (original) theatre posters, featuring several of the best-known scenes with a Buy It Now cost of $1,195.  A hefty price tag for sure, but peanuts when considering that you’d be owning an actual piece of horror movie history.  Plus, it makes the perfect Christmas present for Grandma.

Happy Holidays From All of us at Horror News Network