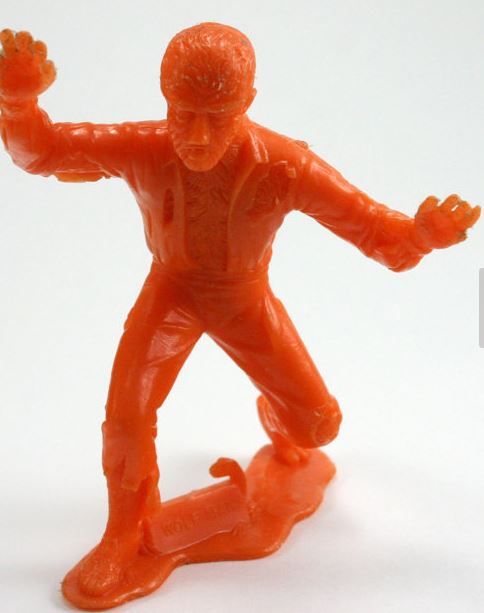 Welcome, my fiends, to the latest edition of Horror Hunting!  As the temperature plummets, the opportunity to score some killer horror
collectibles continues to trend upward (or downward, depending on your version of paradise).  This week we once again revisit those horror movie
staples, the Universal Monster line.  And keeping it contemporary, we’ll talk about a cool action figure from The Walking Dead line that may have
gone unnoticed on its initial release (but surely should NOT have!).  Let the spectacle begin……

In case you haven’t heard, basic is the new extraordinary.  When dealing with the OGs of the Universal Monsters line, nothing about them is
ordinary.  A few columns ago I professed my affinity for the one and only Creature from the Black Lagoon.  But what about that other American
original of classic horror lore, the Wolf-Man?  Sure a silver bullet can do him in, but he’s really the only one that can relate to us on a human
level and there’s something to be said for that.  The plastic figurine (already posed) from 1963, created by Louis Marx & Co., reminds us that
the hairy bastard was scaring kids over 50 years ago too.  What makes this so cool is the simplicity of the mold, and the fact that the iconic
image still holds up.  Available for a steep price ($64.97), it’s worth every penny.

For the past two seasons, all hardcore fans of The Walking Dead comic have been screaming for the story’s greatest villain, Negan, to make his
foul-mouthed debut.  While Robert Kirkman has offered many various explanations to throw viewers and readers off as much as possible (including
claiming that Negan would never get past the censors), this bad guy’s reputation is too big to ignore.  while you’ll have to wait to see him on
TV, you can own this awesome exclusive action figure that the McFarlane’s Toys website offered back in the spring.  While they’re all sold out
there, Amazon has some up for sale on the secondary market.  You’ll have to fork over about $40 (about double the original McFarlane price), but
this piece has the potential to explode once Negan graces us with his presence on AMC.  This is especially true of the variant black and white
version, which is always more popular with the comic book-collecting purists.