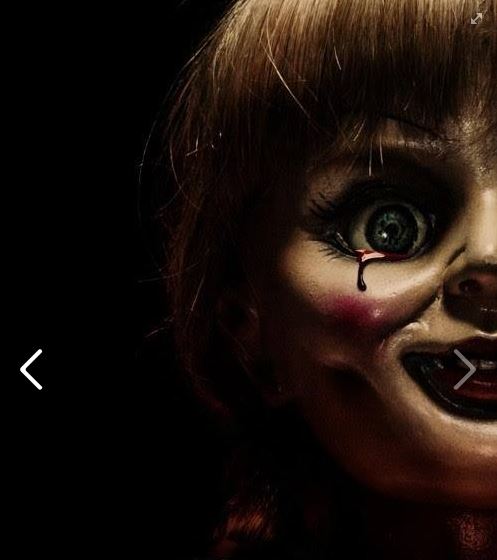 Welcome to a new edition of Horror Hunting! for this first week of September!  Autumn is right around the corner…..which, of course, means the beginning of Halloween season.  For all of us horror fiends, killer new movies, conventions and creepy new collectibles usher in the witching season with ghoulish flair.  And while we’re on the topic….THANK YOU to all HNN fans and all-around horror fanatics that graced us with their presence at CT HorrorFest!  A great time was had by all (attendees and celebrities alike), and we can’t wait to do it all again!  If you haven’t yet, please check out the official CT HorrorFest Facebook page for updates and announcements as we speed into 2015 (https://www.facebook.com/CTHorrorFest?fref=ts)
Without further adieu, check out what we have in store for you…..

One of the best horror movies in the last several years, in my opinion, was The Conjuring.  This James Wan production managed to secure the horror-friendly R-rating from the MPAA, despite an almost-complete lack of gore or curse words (two main triggers for this designation).  The brutal tension aside, many can argue that one of the film’s stars is the cursed doll Annabelle (based on the Warrens’ real-life case of the possessed Raggedy Ann doll, currently on display in Lorraine’s Monroe, CT museum).  While Annabelle will be getting her own movie, scheduled to be released in October, the good folks at Mezco have announced plans to give the demonic doll the Living Dead Doll treatment with a special edition likeness.  Not much is known as of right now (look, release date, etc.), but just the thought of this horror half-pint wreaking real-life havoc in unsuspecting victims’ homes (or rather “suspecting”, as they surely know what they’re getting into when they make the purchase) is enough to pique my interest.  More details will hopefully be available at the Mezco booth at this year’s New York Comic Con, but those will be incidental.  Owning one of these Annabelle/Living Dead Dolls replicas should be a foregone conclusion for all horror fans…..

NOTHING will be more sentimental for nostalgic horror toys collectors than two simple words:  Universal Monsters.  This brand has produced some of the earliest, and most sought-after, model kits featuring horror film and book icons since the 1960s, and continue to be recognized as the holy grails of scary toys.  The license-holders for this series have been many and varied (Aurora Plastics Corp, NECA Toys, with the most current being Diamond Select Toys), but to me action figures produced by REMCO from the early ’80s are my favorite.  Perhaps this has to do with the timing (I was just starting elementary school at this time, and easily impressionable), but the molds used were wicked, and the collect-ability for these 3 3/4-inch beauties is immeasurable.  While there are many auctions currently online that offer variations of these fright film legends, you can’t go wrong with a Mummy, Phantom of the Opera, Frankenstein, Dracula and Creature from the Black Lagoon combination.  Check out EBay for a loose set of these five, from REMCO’s 1981 line.  To me, it’s well worth the $159.90 (FREE standard shipping) to recapture a bit of my toy-collecting childhood.