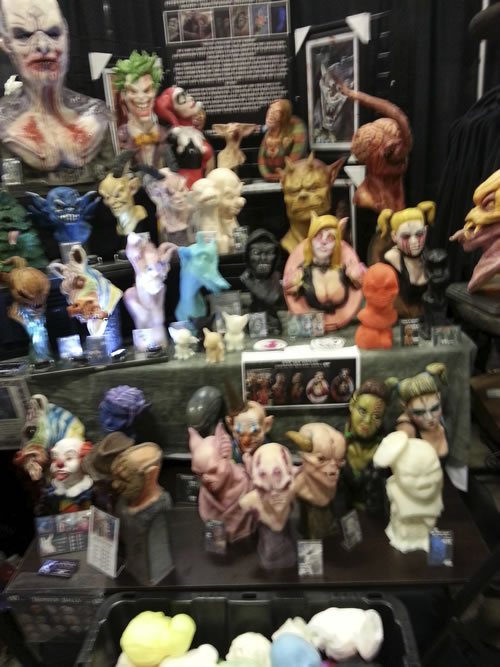 I am a huge fan of both Re-Animator and wordplay, so I attended the convention as Herbert Westcoast. Speaking of cosplay, there were some truly incredible costumes present. I can’t do them justice through mere description, but there are plenty of pictures below.

The convention floor wasn’t huge, but it was packed absolutely full with vendors of all varieties. You could buy bone sculptures, preserved cow hearts, zombified teddy bears or cartoon plushies, replica Phantasm spheres, functional crossbows, or basic t-shirts and prints for the faint of heart. (I ended up with a Creature from the Black Lagoon plushie and a gremlin sculpture because I too turn into an energetic monster if I’m fed after midnight).

If you needed a break from the crowds and had some time to spare you could go and get a tattoo. There was a small collection of tattoo artists in one of the signing rooms who were ready and willing to inscribe your body with eldritch symbols. I was tempted to get a Lovecraftian tentacle on my ankle, but common sense (i.e, the knowledge that my parents would absolutely murder me in a way that would make Saw look tame even though I’m in my twenties) prevailed.

At night there were contemporary and classic horror films screened across the street. I got completely lost while trying to find the movie room…until Bruce Abbot gave me directions. I saw Pieces of Talent, a movie about murder and obsession and, of course, Re-Animator. Re-Animator was hosted by late-night horror host Fritz the Owl who provided commentary throughout.

Naturally there were panels. Highlights include:

Overall Horror Hound provided a horrifically good time. It was well organized, had a stellar guest list, and surprisingly good food…though I’ll admit the Soilent Green didn’t look as fresh as I’d like.