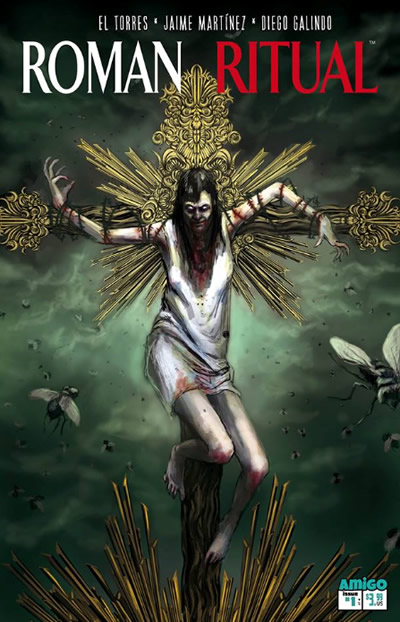 He comes at every subject he takes on with an edge that’s sharp and deadly that you never quite see coming. “Roman Ritual” is no exception. This is a story about an exorcist that while it pays homage to the infamous story by William Peter Blatty goes so much further. People offended by blasphemy need not apply. Amigo Comics distribution is not as widespread as the larger publishers so make sure to ask your comic shop if they can order it for you if they didn’t get it already.

Synopsis: A new horror miniseries by El Torres! A murder involving a cardinal is shaking the Vatican, so cruel and vicious that goes far beyond any crime and conspiracy that may have taken place in the Vatican before.
The self-exiled priest John Brennan is summoned to Rome as the boldest exorcist in the Church because there is an ancient evil spreading within the Holy See itself. From Amigo Comics.

About: Stephanie Shamblin Gray is a staff journalist for ComicMonsters.com and HorrorNewsNetwork.net. You can follow her on Twitter @UndeadStephanie.
And stay up on all the latest news @HorrorNews