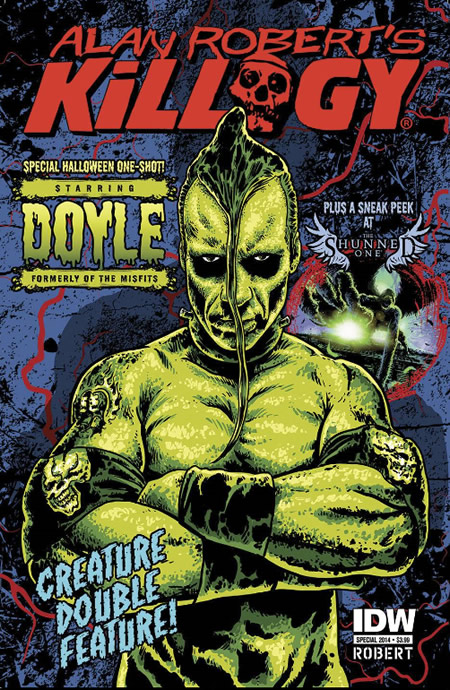 We love Alan Robert here at Horror News Network and ComicMonsters.com. And what’s not to love? He makes kick ass music, horror comics, and horror comics that are being made into films. It seems there is nothing he can’t do. But he has outdone himself this time. This time, he has taken the badass Doyle Wolfgang von Frankenstein and made him into a character in a special Halloween edition horror comic! If that is not two great tastes that taste great together then I don’t know what is! Today, fiends, is a good day. Celebrate, rejoice, and scream with me.

Ex-Misfits horror-punk legend Doyle Wolfgang von Frankenstein stars in a special Halloween edition of Killogy, a comic book created, written and illustrated by Life of Agony’s Alan Robert and published by IDW Publishing (Godzilla, Transformers, Teenage Mutant Ninja Turtles). The critically acclaimed Killogy graphic novel was originally released in 2013 with characters based on celebrities Frank Vincent (Goodfellas, Casino, The Sopranos), Marky Ramone (Rock and Roll Hall of Fame inductee, the Ramones) and Brea Grant (Heroes, Dexter). This Halloween one-shot comic continues where the Killogy story left off and introduces new character, Doyle, as humanity’s last hope in a post-apocalyptic world flooded by an ocean of blood. The book also features a 10-page exclusive first-look at Robert’s forthcoming IDW series The Shunned One, soon to be a motion picture.