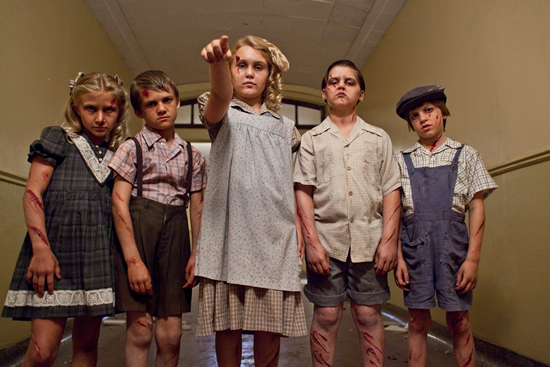 Synopsis: In HOLLOWS GROVE, a young filmmaker, Harold Maxwell, is doing a behind-the-scenes documentary on his ghost hunting reality show friends, the Spirit and Paranormal Investigation Team, (S.P.I.T.), as they prepare for their next assignment. Harold and the S.P.I.T crew head out to film an old, abandoned and supposedly haunted orphanage, Hollows Grove. Soon after arriving at the orphanage the team begins to realize that what they thought would be a routine investigation is turning in to a nightmare from which they cannot escape.

Our Thoughts: Hollows Grove is a new found footage style film about the crew of a ghost hunting reality show that get more than they bargained for when they enter the Hollows Grove Orphanage. The show may be a hoax, but what they encounter is very real.

An FBI agent introduces the found footage, compiled for those assisting the FBI and hoping viewers may shed light on the events of the Hollows Grove Incident. Harold Maxwell sets out to document his friends as they film a standard investigation for their ghost hunting reality show. His friend Tim Jacobs, who stars in the show, informs him that the show is a hoax and take him to meet their friend Bill O’Neil who sets up the scares. Harold then films them discussing the place they would be investigating for that episode. Hollows Grove is an abandoned, haunted orphanage built in 1915 an shut down in 1952. Among the residents was a 7 year old girl named Lilah, with a personality disorder and known to be violent. After slitting the throats of several other children and cutting out the tongue of a caretaker, she was found in a closet covered in blood. Two nurses also committed suicide in the building.

The crew checks out the first floor start out investigating the kitchen, where “Get Out” is written on a wall, as a black cat darts by them out of nowhere. As they make their way to the basement, they find the door oddly locked. Heading back through the kitchen, Roger’s EMF reader goes wild and the pans start shaking wildly. They act freaked out for the camera, but assume that Bill had rigged it as usual. As they are leaving the kitchen, the cat they had encountered is slammed into the wall in front of them and killed. At this point they are genuinely freaked. More strange and unexplained events start happening. Though they assume everything is rigged by Bill, they start to realize that there might actually be something supernatural in the building. The movie picks up considerably in the last third of the film, with some very creepy and shocking scenes.