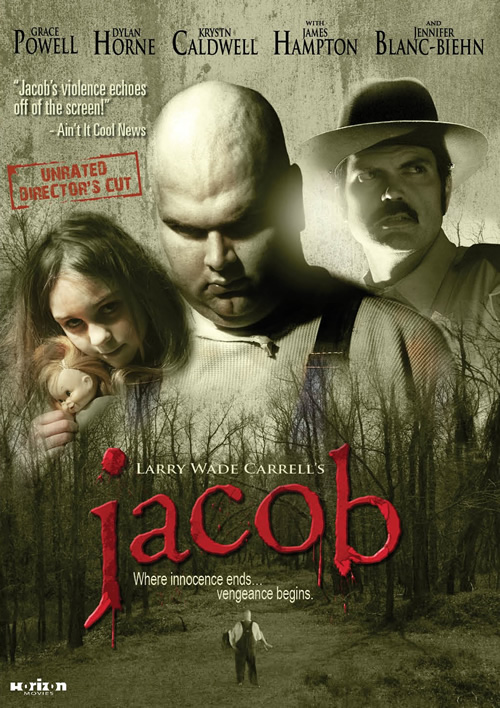 Being a director is hard enough, but when you add writer and actor to that skill set, you have a very special artist. Larry Wade Carrell is that rare breed of filmmaker who can take any genre and make it his own. His forte has been horror though, and his award winning film Jacob is evidence of his skills at creating and maintaining an atmosphere of menace and tragedy that approaches Shakespearean levels.  With the imminent release of his film She Rises on the horizon, a tale of terror, madness, and movie making, HNN was fortunate to speak to Carrell at the Macabre Faire Film Festival.

HNN: Tell me about your film Jacob

LWC: I think Jacob can be best summed up by what Robert Englund said about the film “It’s  Of Mice and Men meets Friday the 13th” which is a good example of what it is. I used to be in the haunted house business, haunted attractions, and I got sick of seeing one room is Jason, one room is Freddy Krueger. It was all the same so I decided to create my own back story, a legend for my own serial killer, my own monster. Jacob is the story of a 16 year old kid who stands 6’5’’ weighs 400 lbs. and he hears voices that tell him to do things like take cats apart and burn down the neighbor’s garage. It’s not that he’s schizophrenic; it’s a supernatural force.  His little sister hears these same voices and tries to keep him straight saying “Jacob don’t do that, it’s not right” but one day his step-father comes home and in a drunken rage, he accidentally kills her which sets Jacob off into a murderous rampage. That’s what Jacob’s about.

HNN: Usually, we think that family is a haven from horror. Why did you make family a place for horror?

LWC: Well for Jacob, I wanted something real, and that real drama and emotions of a family is what I was looking for. That real tragedy, the relationship between a brother and a sister, the struggles of a mother who has lost her husband gives you the opportunity as a storyteller to tell a story with real characters, driven by real emotions that make the audience attach to them so that when bad things happen to them you care, you really feel for that character. That’s what drove me to make a family based film. What’s funny is it does things you never intended like how the audience feels sorry for and really connects with Jacob and his little sister. Jacob becomes sort of an anti-hero because they want him to take vengeance for the little girl getting murdered.

HNN: Did you draw from any personal observations or experiences with family?

LWC: Everything I do, I take something from inside. It’s all about passion and making things real.  I draw on all my personal experiences whenever I’m doing a project.

HNN: Who are some of your cinematic influences?

LWC:  There’s been so many. Jaws is probably my favorite movie of all time. Spielberg. It’s a classic. Sling Blade was very good.  All the way to Nightbreed and Hellraiser. Nightmare on Elm Street. It’s all over the place.  I like movies that move me emotionally.

HNN:  Do you have a preference in genre when you develop a film?

LWC:  I just like good movies and good stories. My next picture is a western. I’ll do just about anything if it’s good.

HNN: Who are your influences when it comes to westerns?

LWC:  Tombstone is one of my favorites. I researched everything, I looked at the classic John Wayne films, the Sergio Leone movies, I even went back and read some classic Louie L’Amour.

HNN: Your western is called The Sound of Thunder right?

HNN: Can you tell me about your film Floodwaters?

LWC: Floodwaters is a little project that was the first time I did something I didn’t write or totally conceive. A guy was looking for a director for his project and he pitched it to me and there was something interesting about it, and we got together and talked and ended up working on it together.

HNN: Does your approach to directing differ when it’s not something you conceived or wrote?

LWC: What I look for when I’m directing actors is that there are no false moments, everything needs to feel as real as possible so that when you sit down to watch that movie you get taken away and you forget you had a bad day, you had a fight with your wife, you don’t have enough money to pay this bill, but for 90 minutes you’re on a vacation from life, you’re totally removed from it so by the end of it you’re just like “Wow!”  I think it’s important that we have that in life.  When I’m working on a project and it’s something someone else has created I try to look for those moments and ask myself how I can make this memorable and real.

HNN: You act, direct, write, and edit. Do you have a preference for one of these creative roles?

LWC: I love acting the most. If I could just live between action and cut, that’s what I’d do.  But I barely get to do it with everything else going on.

HNN: How did you get started with acting?

LWC: I guess I’ve been acting all my life. “Larry, did you break that vase?” (Feigns innocence) “No, ma’am.”  I started in the haunted attraction industry and I did haunted houses. Even then I wanted to move people. From the time they came in to be on an experience where everything you saw, everything you smelt, everything you felt just added to that story, that realism. And that carries through to performance.  Whenever people tell me that I’m a good actor (and I don’t think I am) but what I am able to do is go back and remember something especially bad or good that happened and draw on those moments and make it real.

HNN: How did you get started in directing?

LWC: I wasn’t getting enough acting work! It goes back to my haunted house experiences.  I wanted to create and deliver a whole package.  A whole story and share in the emotions with an audience.

HNN: Did you go to film school?

LWC:  No, but with the haunted houses I was coming up with stories, I was hiring actors, I was working with them, I was directing them, I was clothing them, I was doing the special effects, I was doing the makeup, I was dressing the sets, doing everything and I kept getting frustrated because the kid I would hire to be scary would just stand there and drink a Pepsi  not scaring anyone or people would come through with their cell phones on and say “You can’t scare me.” You paid for this! What are you doing? I would get so upset. They would tear stuff up. One night I got really frustrated and one of my good friends said that I should take pictures because they last forever. Something just clicked.  I need to get a camera. I’m building sets, I’m working with actors. I can get it perfect and have it right and share this with somebody forever. So I learned about cameras and video, reading books on film and how to write scripts. I went on the internet and would read 50 scripts to get the format right. I taught myself everything.

HNN: Can you tell me about She Rises?

LWC: She Rises is a movie I just did with Blanc-Biehn productions which is owned by Michael Biehn and Jennifer Blanc-Biehn. It’s a really great story and it stars Angus Macfadyen , Jennifer Blanc-Biehn and Daisy McCrackin from Halloween: Resurrection and the Angel TV series. It’s the story of an actor and his girlfriend; she’s a director. They’re a weird Hollywood couple, and they’re on location in some small town making a low budget horror movie.  One night after shooting they get lost and they pull up at this house in the middle of the woods where they’re taken in by this strange woman and her weird old dad. It turns into this very surreal nightmare where they are trapped there. It started out as a little horror movie but became something so much more with the performances of the actors. They elevated  the project to a whole other level that I didn’t know existed. It’s really about the descent into madness  of this actor’s mind and this nightmare he’s trapped in.  What’s really great is throughout the story we recreate some classic scenes from movies like The Shining and Psycho and even stuff like Hamlet because in this guy’s mind he’s an actor, he always wanted to do these great roles and be these great characters but he never had the chance.  He’s frustrated and in his dreams he’s trapped where he has these opportunities but this thing is after him.

HNN: What advice would you give a young filmmaker just getting started?

LWC: Follow your heart. Follow your dreams. Don’t let anybody ever tell you that you can’t do anything because the only way that you’ll ever fail or not achieve your dreams is if you give up and don’t try. If you want to be an actor or filmmaker get involved in the film community where you’re at. Get involved. Work on any set you can get on even if you’re just doing the food. Meet people. Develop relationships. You’ll get invited back. Next thing you know, you’re making movies in Hollywood.

HNN: Thank you for your time Larry and good luck with your projects.