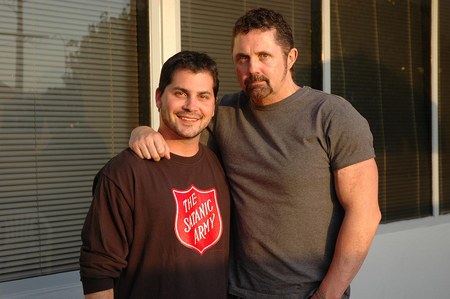 Horror News Network: With the third installment of the â€œHatchetâ€ series, this is your third time playing Victor Crowley. How has the journey been creating this new horror icon?

Kane Hodder: You know since I wasnâ€™t the originator of the â€œJasonâ€ character, I just ended up playing him more than anyone else, itâ€™s a bit different. Now I can develop the character from the beginning. From the first moment we see Victor Iâ€™ve been able to help develop, of course with Adam Green, this character. Itâ€™s really rewarding for an actor to originate a character that takes three movies to play out the characterâ€™s story. Knowing from Adam that this was always meant to be more than one movie, itâ€™s been such a pleasure to have that amount of time to reveal the character slower. Itâ€™s a way to present the character that you usually donâ€™t have the luxury of doing so. I knew Adam was planning on doing three films, so I was able to take my time in letting the audience know what was going on in Victorâ€™s head.

Horror News Network: Since you brought up the â€œJasonâ€ characterâ€, I have to say itâ€™s really awesome for horror fans to see you and Derek Mears pitted against each other. What was it like for you guys?

Kane Hodder: Well I think both of us agree that it was a really cool thing for us to do, to have two of us who are currently known as playing â€œJason Vorheesâ€ going up against each other. We both decided from the beginning that it wouldnâ€™t be a big, drawn out battle because the whole scene is supposed to surprise the audience. If that doesnâ€™t surprise the audience, I donâ€™t know what will because of the way our scene is presented, people expect one thing and it ends up to be completely different. I love surprising the audience like that. To me, thatâ€™s what horror movies are about, startling the audience.

Horror News Network: The cast of â€œHatchet IIIâ€ is full of icons from the horror genre, including yourself. Pretty much everything Adam Green does, movies to TV, his love of the genre shows through. What was shooting the film like since some of the scenes are pretty gory and brutal moments, as well as some humorous ones?

Kane Hodder: I think any actors who have worked with Adam Green will agree that anytime you do an Adam Green production, itâ€™s nothing but pure fun. I donâ€™t ever see that changing, heâ€™ hasnâ€™t changed that attitude since the beginning of his career. It will always be fun to work with him. I think heâ€™s a brilliant writer. Sometimes the scenes in a horror movie between the violence can be tedious. With Adam, the scenes between the action is just as entertaining.

Adam is so good with casting talented actors. He hires actors that bring so much to their characters that its makes it even more enjoyable. Thatâ€™s where his biggest talent lies is writing and certainly directing.

Horror News Network: How was it working under the direction of BJ McDonnell instead of Adam Green this time around?

Kane Hodder: Well, Adam was there every day, so it was still the same feel. But, BJ has been working on the set of all the â€œHatchetâ€ movies from the beginning as well. Heâ€™s been the main camera operator. He knows the story just as well as any of us do. So BJ has been around to see how Victor has developed and changed. He was a good choice, especially being a camera operator and shooting all the action sequences, and this one has a lot of action in it. Those of us who were in the previous films already knew him as a person, so it was an easy transition.

Horror News Network: Were you ever worried throughout the last two films in the series that you’re going to crush Danielle Harris since she’sÂ so pettite?

Kane Hodder: Danielle is small, but I will say she is tough. Sheâ€™s very feminine, but not fragile. Thatâ€™s great for me as the guy who is trying to kill her not to have to worry that sheâ€™s not going to get hurt. She got banged up pretty good in the final scene and never complained at all.

Horror News Network: With â€œHatchetâ€ and, of course, â€œFriday the 13thâ€, youâ€™ve been able to play two horror icons. But youâ€™ve also been in a ton of other horror flicks. Like â€œAdam Greenâ€™s â€œFrozen,â€ and â€œAfflicted,â€ etc. was a very intense film. What keeps drawing you back to the genre?

Kane Hodder: I guess because I have some notoriety within horror that people think itâ€™s would be cool to have me. Itâ€™s always nice to also get characters like I did in â€œThe Afflictedâ€ who wasnâ€™t violent at all, which is totally different than what I normally do. Itâ€™s nice to try something you havenâ€™t tried before. Thanks to Adam Green, I was able to play a part where I showed some emotion, after which I started getting these offers for different types of roles. But donâ€™t get me wrong, Iâ€™ll always love being the bad guy.

Horror News Network: Do you think this is really it for Victor Crowley?

Kane Hodder: Well you never know, but it seems fairly definitive right now. I canâ€™t imagine how he could continue. But you know what? Adam Green is a fucking genius! If anybody would be able to pull it off, he could do it.

Horror News Network: Who would win in a fight? Victor Crowley or Jason Vorhees?

Kane Hodder: HA! That would be quite the fight. I would love to play both characters at the time. It would be really, really close match. Iâ€™d give a very slight edge to Crowley, because heâ€™s a little more unpredictable. Jason you know, even if he doesnâ€™t run, heâ€™s going to get you. VERY close, but maybe Victor coming out on top.

Horror News Network: I thought your answer would be â€œDuh! Kane Hodderâ€

Kane Hodder: HA! Good answer! Thatâ€™s how I should answer that from now on.

Horror News Network: Thanks so much for your time Kane!
Â