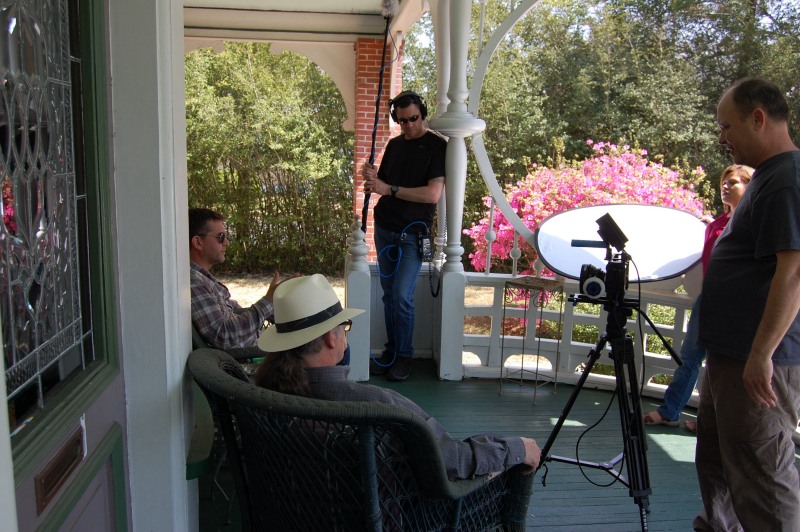 Mike T. Lyddon is the award winning writer, director, cinematographer, and producer of several stunningly original horror films. Starting in 1994 with Cut Up, Lyddon’s work in the horror genre includes Footage Found, Arabi, Thing in the Shed, The Cordyceps Principle, and Horror Anthology Movie Volume 1, but it is his current project, the anthology film Creepers and in particular his segment By the Hair of the Head, that has created a significant buzz in the horror community. HNN talked with Lyddon about his career and his views on the current state of horror.

HNN: How did you get started in film making?

MTL: As a teen, super 8, 16mm and VHS were the mediums for amateur filmmakers so I ended up shooting several super 8 short horror films with friends in and around the Mojave desert about 70 miles north of L.A.

HNN: Did you go to film school?

MTL: I went to a few classes at a couple of community colleges but didn’t get much out of them. As with any other art form you just have to keep doing it until you find your groove. The problem with film oriented universities is that they keep churning out technocrats who know the mechanics but their stuff ends up looking like everyone else’s. In horror I call this the “James Wan” effect, where the same formulas are repeated ad nauseum and you end up with a “Pavlov’s Dog” method of filmmaking, by which I mean that you keep repeating a horror trope to the point that the audience not only responds to it, they’re expecting it.

Watch The Conjuring, Insidious, Annabelle and some of the Paranormal Activity films, all put out by the same producers. You will start noticing they use the same tropes over and over again like scenes of a person being suddenly dragged across the floor by an unseen force or the old “knock knock knock” “clap clap clap” repetition of an action which results in a cheap jump scare. Jump scares are not necessarily bad, but when you keep using them it lessens the impact of the horror. Call me crazy, but I think horror should be derived from the story you are telling, not gimmicks.

HNN: What are some of your favorite films and filmmakers?

HNN: What is your favorite part of the film making process?

MTL: That’s a difficult question. There are both great and terrible aspects to all phases but I’d have to say developing a script and shooting/directing it are probably the most enjoyable. Post-production can be a hoot, but it also can be a royal pain in the ass. I typically do all the editing and post  for my no-budget films, and while that affords greater control it’s often a tedious and nerve-wracking exercise. It is satisfying getting to that first cut though.

HNN: Why work in the horror genre?

MTL: Is there anything else? 😉

Seriously, horror has the power to reveal unsightly layers of humanity without hitting you over the head with it. As with science fiction I think the allegorical possibilities  are endless. Both The Exorcist and Night of the Living Dead are multi-layered films wherein the horror isn’t just surface level, these films reveal real human horror. Avarice, envy, self-doubt, self-righteousness, bigotry..it’s all there, but crafted in such a way that it draws you in instead of turning you off.  Then there are the more overt yet extremely effective classic TV shows like Twilight Zone, Night Gallery and The Outer Limits.

And of course I love making CREATURES! Whether they are lumbering monsters or creepy ventriloquist dolls, there’s nothing quite as satisfying as bringing a creation to life!

HNN: I first discovered your work through your film Thing in the Shed. How did that film take shape?

MTL: That was part of the first horror anthology volume, and with both Thing in the Shed and The Cordyceps Principle I wanted to explore some recent themes in science. Thing in the Shed deals with bio-nanotechnology under the guise of “one dark and stormy night” while The Cordyceps Principle has to do with the Cordyceps fungus and what would happen if the fungus infected humans the way it does insects and other invertebrates.

Thing in the Shed was my first crack at digital SLR filmmaking and considering we were using 10 dollar utility lights and makeshift gear I think it turned out very well. The mysterious black box, the “Pandora’s Box” if you will, which holds impending doom for humanity..or does it?

HNN: How did Creepers come together?

MTL: After doing volume one I had a good idea where I wanted to go with volume 2 which became Creepers. The main idea was to get stories from established writers and bring in new filmmakers with a track record. Gregory Lamberson was number one on the list and he brought in the considerable talents of writer Jeff Strand for the story and screenplay of “Gave Up the Ghost,” which Lamberson directed.  Jeremiah Kipp was attached with his version of Poe’s “Berenice” and Christian Walker made a very well produced adaptation of Lafcadio Hearn’s “Of a Promise Broken.” Walker is also a good actor whose talents I used in “The Cordyceps Principle” in volume one, and he became one of the leads the Creepers segment I directed and produced called “By the Hair of the Head.”

HNN: Why did you choose Joe R. Lansdale’s “By the Hair of the Head” to adapt?

MTL: Lansdale is a great writer and being able to adapt one of his stories was a dream (or nightmare if you will) come true. It’s an intriguing tale because it combines both psychological and supernatural elements in a classic horror style, something of a departure from his usual, more visceral approach to horror stories.

HNN: What was your approach to filming the story?

The original story takes place in a lighthouse, and after searching far and wide for a lighthouse which would suit the needs of the story, I came up with zilch. Either they were too far away or too expensive (or both) so I adapted the screenplay to have the film take place in an old victorian style house, namely the famous Kate Shepard house located in Mobile, Alabama.  I brought in actors Brian Lanigan and Christian Walker for the two lead roles and they did a great job. Both came away with Outstanding Performance awards at this year’s Zed Fest in Los Angeles and the film came away with four more awards: Outstanding screenplay, supernatural horror, practical effects and Outstanding Production Assistant for my wife Rubi, who totally deserved it. Not only did she make the costumes for actress Chloe Dykes (who does a fine job playing Caroline the doll) but she handled many production duties very well, both for the segment and for the Creepers wraparound.

HNN: Christian Walker and Brian Lannigan give excellent performances in the adaptation. How do you direct your actors?

MTL: Typically I like to get together with the actors a few times before the shoot to get them in the groove with their roles. With no-budget films it can be rather difficult to block the scenes if you don’t have access to the locations until shooting time, so in this case I made X amount of storyboards for key scenes and figured out the lighting/blocking pretty much on the spot. Brian Lanigan’s character “Machen” was the one with the secret, so it was important for Brian to play the role as if he’s a man with something to hide, and I think that came across well. Christian Walker’s character “Joseph” was that of a fledgling writer who is just looking for a place where he can write in peace, so he’s the guy who happens to stumble into the impending horror. Less action, more dialog in this story, so it was crucial that the dialog flowed from scene to scene without getting bogged down. Of course it’s the last 7 minutes of this film where everything comes together, and I think that happened with great intensity due in part to the actors and my ability to use every last drop of atmosphere that location had to offer.  One of the trickiest things was to direct 8 year old actress Chloe Dykes on how to behave like the spirit of a little girl trapped inside a ventriloquist dummy! But she got it, and when she walks through that door it still sends shivers down my spine..

HNN: Why the anthology format?

MTL: Two things – I like seeing what other filmmakers bring to the table, and I like the variety that anthologies have to offer. If you don’t like one segment, there’s always the next..

HNN: Is it difficult to connect multiple directors and stories into a cohesive whole?

MTL: In a word, yes. First you have to decide the order of the films and how they flow in relation to each other. Then you need to form a wraparound story based upon that line up, and something that leads to a satisfactory (if not enjoyable) conclusion.

Creepers works very well in that respect and I think the wraparound actors James Marler and Roy Jackson Jr. do a very good job with the segues.

HNN: What would be your dream project?

MTL: One  dream project would be resurrecting The Night Gallery as a TV series. I think Serling got screwed with the first one. The potential was there and there are some tremendous stories in the first two seasons, but I think the world needs a first class, character/story driven horror series. We need less zombies, vampires, serial killers and comic book characters and more innovation. More horror geared for adult audiences.

MTL: I’m pleased to announce that I’ve landed a directing and co-producing role for a much larger budget feature to be shot in New Orleans late spring of 2015. It’s a historical drama with supernatural overtones called “Scath” (Gaelic for shadow) from the original story by Jean Stallard who is also producing the film. Not only is she a good writer, she can really tickle the ivories as shown with her piano work for the soundtrack of the Creepers wraparound. As well as being a unique horror film, Scath will take us to a very grim time in New Orleans history that few people are aware of, but after seeing this movie, few are likely to forget!

We’ve just started pre-production, and I will keep you apprised of the progress as we move into the new year.

Thank you for the interview. Horror News Network has been of great service with the reviews and notices on Creepers and Horror Anthology Movie vol. 1.

HNN: Thank you Mike! We look forward to your future projects!