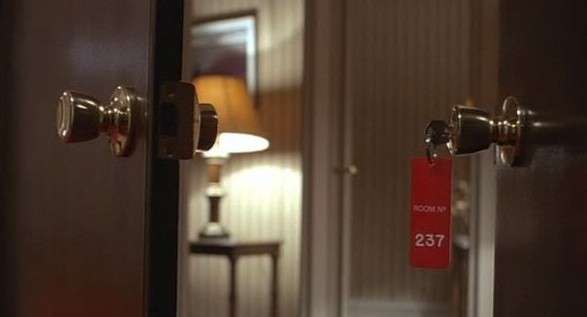 For some reason, The Shining is one of the most divisive horror films ever released. Fans of Stephen King’s source novel bemoan the liberties and revisions perpetuated by the soulless intellectualism of Stanley Kubrick, who supposedly drained all the scares and emotion from King’s horrific depiction of a family deteriorating in an isolated Colorado hotel.  King himself lead the protests by telling anyone who would listen how his masterpiece was debased, and how he could have done a far superior job of bringing the book to the screen.  This delusion was put to rest with the 1997 mini-series version of The Shining, faithfully adapted by the author himself, which not only resulted in a tedious film but also revealed the shortcomings of the novel itself. King may be a good writer, but he’s certainly not the artist Kubrick is. Case in point, Rodney Asche’s documentary Room 237, a film devoted to decoding the secrets of Kubrick’s Shining.  The fact that Room 237 succeeds without any support, comments, or resources from Stanley Kubrick’s estate or Warner Brothers Studios is surely a testament to the power of the original film’s ideas and themes as well as to Asche’s own obsessive drive to understand.

Room 237 (a reference to the mysteriously sinister suite in the Overlook Hotel) examines an array of interpretations and theories about the meaning and significance of The Shining. What was Kubrick saying through King’s story? Was he admitting to being the director of faked moon landing footage? Was he working through his feelings about the Holocaust? The various readings range from the sublime to the ridiculous, but the point of the film is not to answer the question of “what does The Shining mean?” but to celebrate how brilliantly crafted the film is to allow such an diversity of opinion, so I say the more surreal the hypothesis  the better. The most compelling explanation concerns the notion that Kubrick’s Shining is an indictment of Western colonialism and the eradication of Native Americans in the name of progress and capitalism. While this analysis is well supported (much more convincingly argued than any of the other four theories), I was surprised that advocates of this reading didn’t go farther and connect the paternalistic control within the Torrance family with the paternalistic motives used by colonialism to justify civilizing “savages,” often through “correcting them.” I also would have been interested in delving more into economic and gender based commentaries (Jack Torrance is a raging misogynist and a working class dupe of the ruling elite), but I suppose these more academic explorations aren’t as sexy or as “money” as some of the more outré  views of the film.  The presentation of the interpretations matches the creativity of the theories, and the soundtrack by Jonathan Snipes and William Hutson with contributions by The Caretaker (aka V/Vm, aka James Kirby) rivals Wendy Carlos’s brilliant score for The Shining itself.

The tag line for this fascinating documentary is “Many ways in. No way out,” referring of course to the film’s hedge maze used by Kubrick to represent the twisting insanity of Jack Torrance’s mind, but it can also be applied to the labyrinthine questions and interpretations emanating from The Shining.  While there might not be as many ways in as Room 237 claims, the time spent there is well worth the effort.