Horror fans know Nicholas Vince from Clive Barker’s classic, Hellraiser, where Vince played Chatterer, and from Nightbreed where he portrayed Kinski. Although he’s known for playing one of the sadistic Cenobites, Vince is also known for getting chatty in a good-natured way by taking on the interviewer’s role.  His YouTube channel, Chattering with Nicholas Vince ended in 2018 after 140 episodes.  This past October, he partnered with Chris Roe and Tea Time Productions to launch The Chattering Hour podcast available on YouTube and other streaming services. To date, he has delved into carreer-spanning conversations with legends like Malcolm McDowell and Traci Lords.  We recently caught up with Nicholas to discuss this new project and his own memorable career.

Horror News Network: In the craziness of 2020, how have you been staying sane?

Nicholas Vince: During the first lockdown in the UK, I turned to creating some cartoons based on my husband and our dog. Basically, our lives from a dog’s point of view. I also created some art based on the Chatterer character, along with a couple of inspirational quotes, including one from my show I Am Monsters!

Horror News Network: Most horror fans know you from the Hellraiser films, so I have to ask how do you think the Cenobites would’ve handled the pandemic?

Nicholas Vince: I’m immediately reminded of the deleted scene in Hellbound: Hellraiser II where Pinhead (Doug Bradley) and the Female Cenobite (Barbie Wilde) were seen wearing surgeon’s masks. So, they were definitely ahead of the game. Generally, I think they would just enjoy watching people suffer.

Horror News Network: I’m guessing you’ve been asked this before, but I have to ask about the costumes and prosthetics you have donned in Clive Barker’s films. You were unrecognizable as monsters in both Hellraiser and Nightbreed. The images that were created in that process became iconic.  How many hours were spent in makeup and wardrobe?  What do you remember about that time and actually working in those costumes?

Nicholas Vince: The Chatterer makeup and costume were both extremely restrictive. I couldn’t really hear, speak or see in that outfit and as the leather costume was sculpted to fit as closely as possible. I wasn’t able to raise my arms above shoulder height. Fortunately, most of the time I wasn’t left in the costume and makeup for long periods, but there were a couple of days when I was, which were tough. In terms of getting into makeup and costume, that was around an hour. Kinski was an absolute joy in comparison, as I could see, speak and hear, and I had lines to say. Downside, I had to spend 5 hours in the makeup chair. But honestly, that was the easier part of the job. I wasn’t on my feet like the wonderful makeup artists. I do remember visiting the studios one day before filming and watching a man distressing Kinski’s costume for Nightbreed. It was fascinating to watch how he made the costume reflect that Kinski had just gone through an ordeal at the end of the film.

Horror News Network: When you look back on the Hellraiser series and your other work in the genre, are you surprised that fans are still as excited about these films decades later?

Nicholas Vince: I’m delighted that people are still enjoying Hellraiser all these years later. It’s fascinating to meet with people who are seeing the film for the first time, which I’ve done at screenings in the last couple of years. I think it’s a real testament to Clive Barker’s imagination, all the talented people involved in creating the film and just how unique a story it was and is, that it’s still gaining new fans.

Horror News Network: Last year you performed a one man show I Am Monsters! in the UK. Can you speak more about that show and how it came to be? Do you have plans on performing that again post pandemic?

Nicholas Vince: The show came about from my involvement in the London Horror Festival, the UK’s oldest and largest festival of live horror performance, as the patron for the last few years. I’d seen quite a few one person shows and the format fascinated me. I also wanted to put on record some of the stories about my fascination with monsters on film since I was a kid, meeting Clive Barker, the creation of Chatterer and more about how celebrating difference is so important in life. Yes, I’d love to perform it again. I was planning on taking it on tour to small venues around the UK, but sadly many of have closed down during the pandemic. The other plan was to perform it at conventions so hopefully, one day people will get to see it live in the US and UK.

Horror News Network: You’ve had Chattering with Nicholas Vince on YouTube for a while now.  What prompted you to relaunch The Chattering Hour YouTube channel along with an accompanying podcast?

Nicholas Vince: My manager, Chris Roe, suggested The Chattering Hour to me a few months ago. One of the reasons I stopped the original show was the technical difficulties in getting people up to speed on Google Hangouts. But with Zoom, most people are familiar with how it all works. It’s been a huge amount of fun as I’ve got to speak to people like Malcolm McDowell, Jonathan Breck, Traci Lords and just last week the voice of The Crypt Keeper himself, John Kassir.

Horror News Network: As an actor, you’ve been interviewed quite a bit.  What is it like for you to be on the other side, asking the questions?  Which do you prefer?

Nicholas Vince: I honestly prefer both. (I’m a Gemini. Holding two competing choices with equal conviction is natural for me.) One of the fun things about being the interviewer is chatting with people who I’ve met briefly at conventions, but now being able to really delve into their stories. I’ve learned a great deal from my guests, all of whom have fascinating and often very funny, stories to tell. I also love acting and telling stories, particular mine, is always fun.

Horror News Network: You’ve had some really great guests on like Malcolm McDowell, Traci Lords, and Courtney Gaines to name a few.  Was there anything about them you learned during the interview that you didn’t know before?  I know I learned that Malcolm McDowell loves Van Morrison’s Moondance.

Nicholas Vince: Honestly, it’s a little difficult to remember them all, as once I’ve finished editing one show then it’s on to the next. So, off the top of my head and rather randomly, the fact that Nancy Loomis is now a sculptress who creates these amazing sculptures from thousands of found objects which are held together without glue. What Jonathan Breck did at 3am on the morning of his audition which landed him the role of The Creeper. How Courtney Gains got a music credit on the film Colors and what he went through during the filming of Memphis Belle. How Daniel Kraus came to writing at an early age and how much it meant to him to work on the George Romero book The Living Dead. How John Kassir got a big break, apparently without wearing pants.  I’ve been really touched by how much people are enjoying the show, particularly as they say they enjoy this long format as there’s a real chance to get to know my guests.

Nicholas Vince: Horror films. I’m notorious for being squeamish and screaming or leaping out of my seat when watching them. But then, that’s all part of the fun. 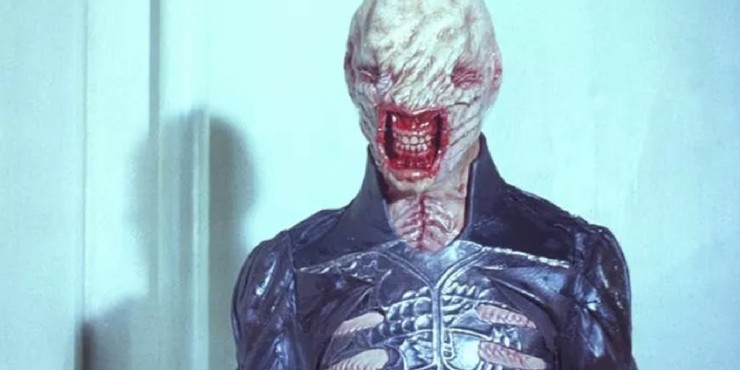 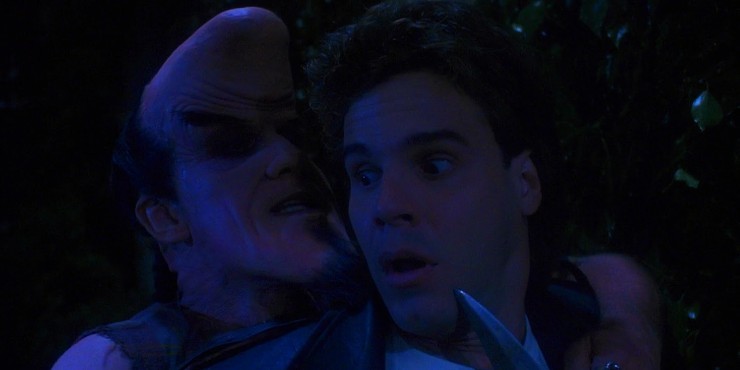 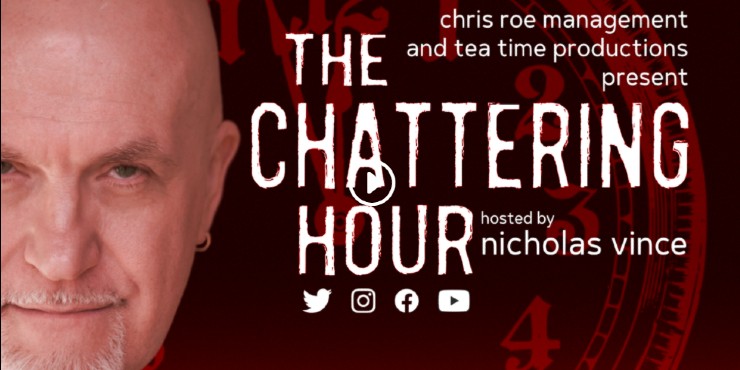 For more information on The Chattering Hour, including platforms and guest schedule, you can visit the website www.thechatteringhour.com.

Like Pinhead to a human soul, horror mastermind Clive Barker is tearing the internet apart with updates on projects of his that are in...