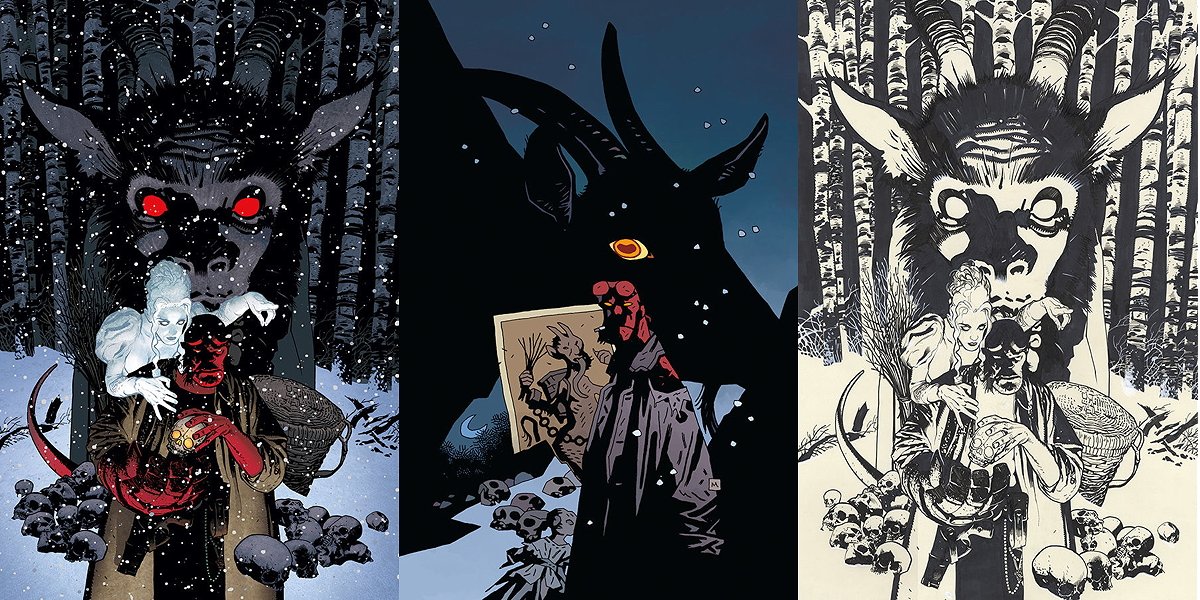 If you have been reading comic books for the past twenty five years, Adam Hughes is no stranger to you.  Hughes has worked for every major company in the industry and has gained a cult following due to his gorgeous cover work, most prominently on the Catwoman and Wonder Woman series.

Even though Hughes has worked for Hellboy’s home base Dark Horse Comics before, he had never illustrated an issue featuring “Big Red”, up to now that is….  Just in time for the holiday season, original Hellboy creator Mike Mignola and Hughes’ Hellboy: Krampusnacht brings together two demonic titans for a yuletide slugfest.

Hughes took some time out of his schedule for an exclusive interview about Hellboy, Krampus, The Ghost and my questioning techniques.

Horror News Network:  How did this collaboration with Mike Mignola come about?  What was it like working with Mike?

Adam Hughes:  That’s TWO questions.  I’m on to you.

I’m part of a Big Brother group that Mike volunteers for, and because of MANY unpaid speeding tickets, he got stuck with me.  I also get picked last for dodge ball, as well.

Actually, Mike asked me to collaborate on something with him, while I was doing Betty & Veronica.  I thought it was going to be something like a Girls Of The B.P.R.D. Winter Bikini Special, but it turned out to be a creepy little Christmas horror story.  Who knew?

It was great working with Mike.  I say that because I want him to love me.

HNN:  What was your approach to illustrating Hellboy?  What aspect of his character stood out to you?

Hughes: That’s TWO questions again.  You really do grab all the Doritos with one hand, don’t you?

My approach to drawing Hellboy was troubled.  How do I draw THE iconic Mignola character, without aping his style?  To be honest, 22 pages wasn’t enough for me to figure it out.  I don’t think I drew him husky enough, in retrospect, and I gave him more shoulderage than Mike.

The aspect of Hellboy that stood out for me, is his Regular Joe-ness.  Hellboy is just the Orkin Man who happens to be from Hell.  If you’ve got a lich king in your crawl space, Hellboy shows up and goes “Welp, THERE’S your problem.”  It is, to me, the enduring conceit of the concept.

HNN:  Your version of Krampus undergoes a few “transformations” during the story.  Which version was the true essence of the character in your opinion?

One question.  Now you’re getting it.

I have no idea.  I liked one of my designs, Mike liked the other.  We compromised using the Hellboy Metamorphosis Trope.  Mike’s characters are very fluid, demonically changing appearance from page to page.  I love that aspect of the Hellboy universe.  It‘s also a nice reverse justification for why the Krampus looks different in so many of those old postcards. 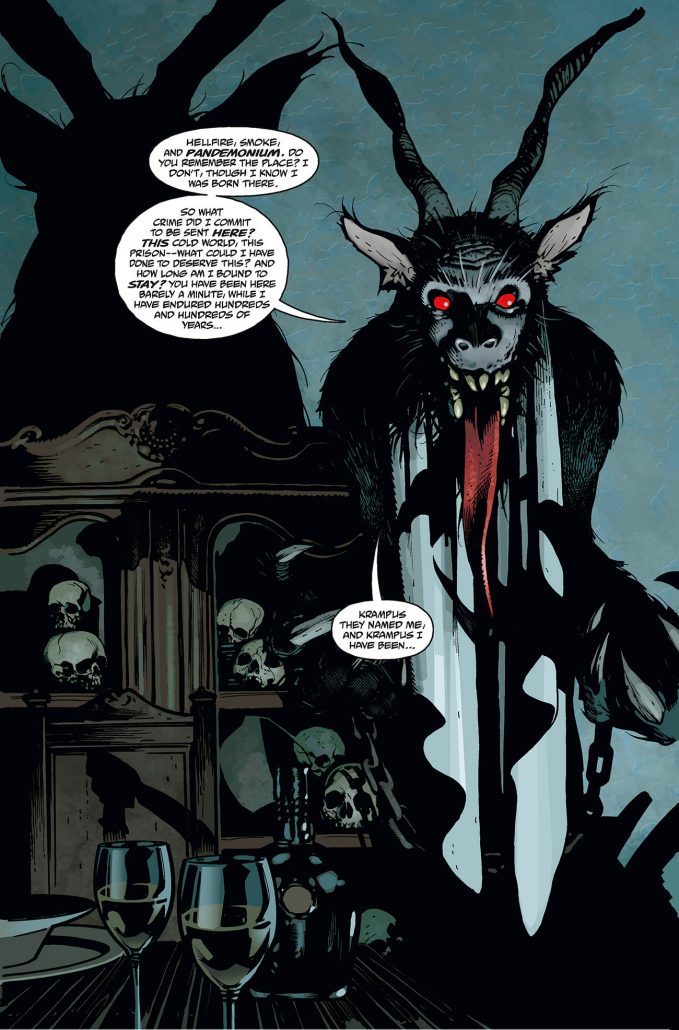 HNN:  The Krampusnacht story features a female ghost and is certainly not the first time you have drawn one.  At the start of your career, one of your first creations for Dark Horse was the Comics Greatest World Character: The Ghost.  What are your memories of your early work for the company and the industry of that era?

Hughes:  Oh, crap on a crap cracker.  I NEVER made the Ghost connection.  Well-played.  I forgive you your multiple questions under a single bullet transgressions. *makes Pope-like hand gesture*

I had a lot of fun on Ghost and am sorry I wasn’t fast enough to pencil it monthly.  Dark Horse and writer Eric Luke liked almost all of my input, and it was a rewarding experience for a young punk.  The industry at that time was thriving, as I recall.  It was the Image Comics ‘rock star’ era.  I kept trying to find the line for Big Success.  I would care less about money if my mortgage company wasn’t obsessed with it.

HNN:  Any projects that you are currently working on that we should know about?

Hughes: No!  I’m adrift in a sea of unemployment.  I have no plans.  I was hoping for Mike to offer me a Liz Sherman Burns All Of Her Clothes Off 12-issue maxi-series, but I guess it’s back to the salt mines for old uncle Adam.

HNN:  Thanks for taking some time for my questions, and we’ll be on the look-out for those aforementioned specials!

Hellboy: Krampusnacht is currently available (with the three different covers pictured above) at comic stores everywhere.