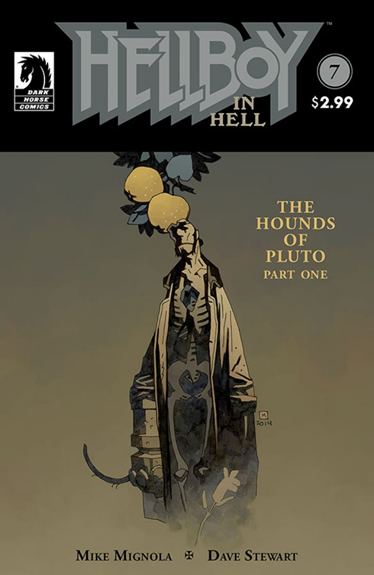 Synopsis:  Hellboy is still dead and in Hell, and things just got worse due to a nasty parasite!

Our Thoughts:  Anyone who is a fan of Mignola’s work probably first recognized him as a master due to the creation of his character Hellboy in the early ’90’s.  Since Hellboy’s creation, the Mignola-verse has grown far and wide with one of the most solid stables of characters in modern comics.  But when all is said and done, all fans always look forward to more stories centering on “big red”.

Following the last story arc that saw Hellboy descend to Hell after an apocalyptical battle in England, we find our reluctant hero still talking to the two dead doctors who diagnose him with a parasitic entity.  Hellboy seeks help (although he’s in no particular rush) and is fortunate to cross paths with another citizen of Hell, Dr. Hoffman.  The problem is that Hoffmann also has some big problems to deal with.  The humor and attitude of Hellboy shine in these interactions as always and the three serious physicians are excellent foils in these scenes.

The highlight of the book is the painted segue early on in the story that has Hellboy take a glimpse at a future that looms for him and the earth.  Mignola’s work here is superb and offers a completely different, bittersweet, and almost hopeful vision for our character’s and the earth’s future.