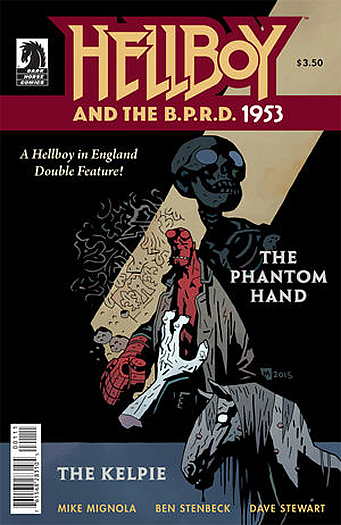 Hellboy and the BPRD 1953: The Phantom Hand and The Kelpie Early Review

Hellboy and the BPRD 1953: The Phantom Hand and The Kelpie One-Shot Early Review

Our Thoughts:  One of the best aspects of the Mignola-verse is the ability for writers and artists to explore the early days of Hellboy and the BPRD.  Many of the best stories have come from these forays into the past and this double-feature is no exception.  In only his second year “on-the-job” Hellboy and former director-father figure Trevor Bruttenholm travel to England for two classic tales of terror.   In the first feature “The Phantom Hand” a popular horror story motif, the crawling hand, is explored.  The set-up is a classic English Ghost story with Hellboy thrown into the mix and a demon-on-demon slugfest ensues.  As Bruttenholm’s friend accurately surmises, “If nothing else, the lad looks like he can take a beating.”

The second feature “The Kelpie” is a story featuring the evil spirit of the highlands and a ghost hunt gone wrong.  This story’s main attraction is one of the scariest illustrations of a horse I’ve ever seen.  Ben Stenbeck will certainly be responsible for many a fan keeping their distance the next time they visit a horse barn or country fair.  Although not intended as a Halloween special, the timing of this issue is perfect.  Pick one up and celebrate any self-respecting horror fan’s favorite holiday!