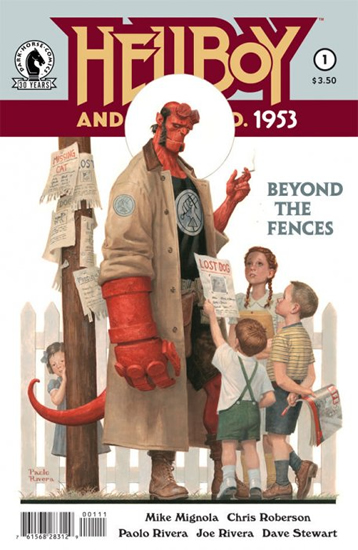 Synopsis:  Hellboy and the agents of the fledgling BPRD investigate a mysterious case of child abduction with familiar overtones.

Our Thoughts:  This issue features the full length debut of Chris Roberson (iZombie) as co-writer on a Mignola-verse title and the foundation that is laid in this first installment is a promising one.  After Hellboy’s first mission with the B.P.R.D. in Brazil, this case seems to be a more mundane investigation in a picture-perfect suburb of the 1950’s.  The Norman Rockwell-esque cover by Paolo Rivera sets the scene perfectly for what is contained inside this issue.  For those currently reading the B.P.R.D. Hell on Earth series, many of the same team dynamics are present, although the members are quite different.

Unlike the current on-going series, we get to step back to a time when Hellboy was the only true supernatural force on the team (although agent Xiang’s struggle with her budding psychic abilities also offers the promise of more).    The hard-boiled agent Stegner contrasts well with the sympathetic nature of Xiang and Hellboy is the naïve youngster who is just beginning to understand his place in the organization and the world.

One of my favorite aspects of these flash back stories is the presence of Hellboy’s mentor/father-figure Archie Muraro.  Although many would assume that Bruttenholm is Hellboy’s traditional father-figure, we see Hellboy’s future personality derived from the sarcastic, joke-cracking Muraro.  Both of these men only appear briefly in the story, allowing Hellboy to experience an adventure away from these guiding influences.  Nonetheless, I miss Archie’s presence in this installment.

The story ends with a clear connection to the B.P.R.D. ’48 series in the form of the Enkeladite substance that interdimensional creatures seem to love, so the stage is set for much more action next issue.