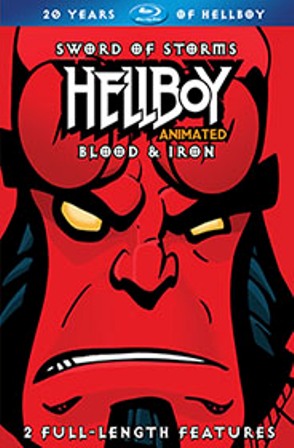 “Sword Of Storms”: When a university professor opens a forbidden scroll, he becomes possessed by the twin demons of Thunder and Lightning who seek to return to our world to wake their brothers, the dragons. Hellboy, researcher Kate Corrigan and Russell Thorne, an albino psychic, travel to Japan to investigate. Hellboy finds the “Sword Of Storms” which transports him to a world of Japanese folklore.

“Blood And Iron”: When Hellboy, Liz Sherman and Abe Sapien are assigned to investigate the ghost-infested mansion of a publicity-hound billionaire, they uncover a plot to resurrect a beautiful yet monstrous vampire from Professor Bruttenholm’s past. But before they can stop her bloodbath, Hellboy will have to battle harpies, hellhounds, a giant werewolf and even the ferocious goddess Hecate herself. From Creative Producers Guillermo Del Toro (writer/director of the Hellboy movie) and Mike Mignola (creator of “Hellboy” comics).