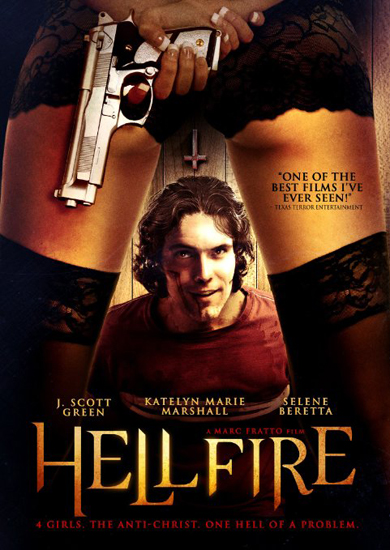 Synopsis: Meet the Antichrist. He’s been kidnapped by a group of women who’ve mistaken him for someone else, and now they’re about to find out exactly who they’re messing with. One by one the women become possessed by demonic forces and turn on each other. As the bodies begin to pile up, the girls fight for their lives and to save mankind against the Prince of Evil.

Our Thoughts: ‘Hell Fire’ is an original and amusing new take on the satanic horror genre. A horrific amount of blloody action, murder and mayhem ensue when a group of hookers kidnap the Antichrist.

The Antichrist himself tells his story from learning who he was as a child, up to his current mission. He tells a particularly unique spin on what he calls the “real” creation story. He’s not quite as powerful as you’d expect him to be, and still in the process of honing his talents. However, he is totally clairvoyant, and can manipulate humans like no other.  When he’s kidnapped, he turns the tables on the group of hookers in gruesome fashion. The ending is more twisted and original than I expected.

The bloody practical effects used in the film were quite effective and reminiscent of ‘The Evil Dead’ at times. With some cheesiness and camp value, the action is entertaining to watch. J. Scott Green is excellent as the charismatic Antichrist. With it’s low budget horror charm, this film is worth watching for anyone wanting to see something new and fun in the satanic horror realm.