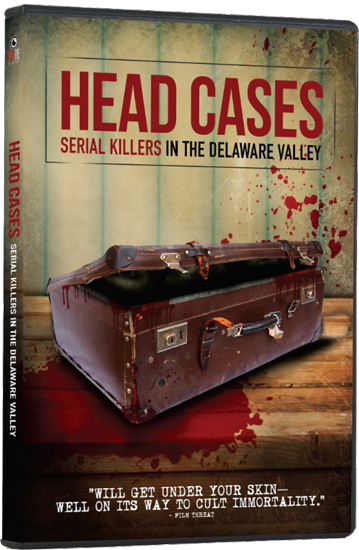 Available Nationwide May 19th on DVD and VOD

“Fantastic, both in style and in storytelling.” — Rogue Cinema

New York, NY – The conclusion to Anthony Spadaccini’s Wayne Montgomery serial killer series is coming home.  Head Cases: Serial Killers in the Delaware Valley will be available nationwide on VOD and DVD May 19th from Wild Eye Releasing.  Inspired by the lives and atrocities of several infamous killers, Montgomery is compelled to document his tranquil suburban life with his wife Andrea and the details of their horrific crimes, first in Head Case, followed by The Ritual, Post-Mortem and finally Head Cases.

Serial killer Wayne Montgomery is alleged to have videotaped 41 killings in the years between 1979 and 2007, leaving behind an extensive found footage library of his work. Now, a new generation copies Wayne’s brutal killings in the digital age. This is the fictionalized, docu-thriller account of one of the world’s most prolific serial killers – and the devoted followers who are hell bent to carry on his legacy.