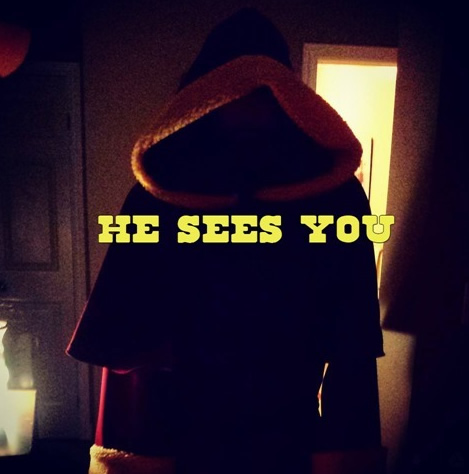 ‘He Sees You’ Available for Free

That’s basically how HE SEES YOU… the new short film from Blair Downey and Michael Hickey happened. The duo, fresh off the success of THE CALMING (which won Best Film and Scariest Film at the Nickel Independent Film Festival’s 48 Hour Horror Challenge), decided to take the same approach to their next film.

“There was no reason not to” says Downey “We proved we could make a good short film with no time and less money when we made THE CALMING.”

“There was a bit more prep this time around, which was nice” adds Hickey. “We were able to bring in some elements like our Santa suit and the ‘Christmas Tales’ book. We knew what we were doing a couple weeks out as opposed to the night before.”

The decision to make a holiday film was simply to give themselves more pressure.

“We figured planning a Christmas movie would make sure we stick to the deadline” laughs Downey, the man behind the story, “and what is creepier than those frigging elves?”

Downey is, of course, referring to the kneehugger elves that have taken over social media feeds the last number of Christmases.  The two planned the no-budget short around the lore of the scout elves reporting naughty behavior to Santa Claus.

The pair have enlisted comedian Matt Wright to co-star with Victoria Holmes (The Calming). Patricia Andrews, Clare Power-Maunder, and Sandy Morris round out the cast with Bruce Brenton providing the sinister narration.

The film was shot over December 13-14, 2014 and edited in roughly the same amount of time, all for a three week release.

“We’re hauling it off the internet on Old Christmas Day (January 6, 2015). We’ll all be done with Christmas by then” assures Hickey. “But it will probably be back next year, and who knows, the ‘Christmas Tales’ book is pretty thick, maybe there’ll be a new chapter to go with it.”