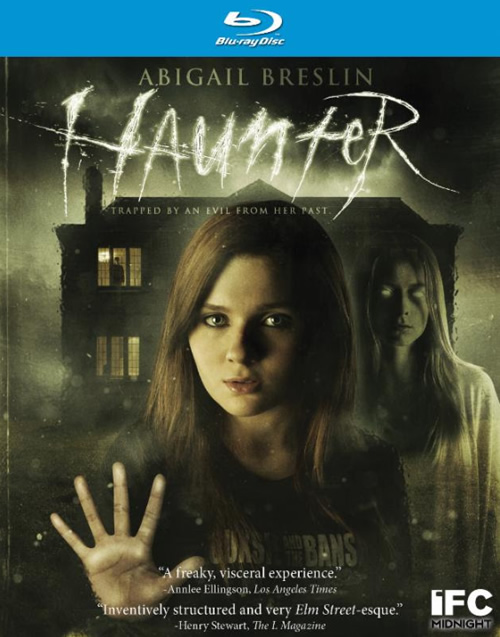 We learned today that IFC is releasing Haunter on DVD/Blu-Ray on February 11th. You can read the official release below.

A teenager comes to the distressing realization that she is a ghost, and must save others from the fate that befell her years earlier, in the eerie horror thriller HAUNTER. The latest film from scare master Vincenzo Natali arrives on Blu-ray and DVD on February 11, 2014, via IFC Midnight and MPI Media Group, with SRPs, respectively, of $29.98 and $24.98.

Abigail Breslin (Little Miss Sunshine, August: Osage County, Zombieland) stars in director Vincenzo Natali’s (Splice, Cube, ABCs of Death 2) unique take on the traditional haunted house story. In 1986, 15-year-old Lisa (Breslin) and her family died in their home under sinister circumstances. Unable to move on, their spirits have continued to roam the house. And for nearly 30 years, they have had to live the same miserable day over and over, never thinking they’re anything but alive.

But now, Lisa has started noticing things that make her believe that she and her uncomprehending family are in fact ghosts. On top of that, she realizes that she must reach out from beyond the grave to help her living counterpart Olivia and her family avoid the same gruesome fate that Lisa and her loved ones suffered all those years ago.

HAUNTER, sure to thrill fans of such films as The Lovely Bones, The Others and Insidious, was an Official Selection at the 2013 SXSW festival.