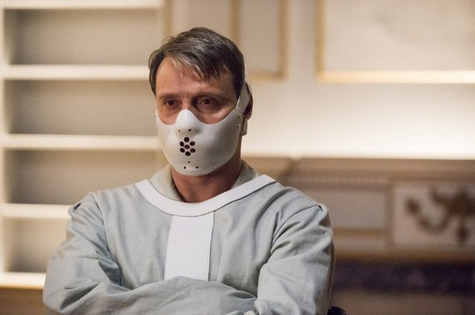 ‘Hannibal’ Weekly Wrap Up – “The Wrath of the Lamb”

‘Hannibal’ Weekly Wrap Up – “The Wrath of the Lamb”

Synopsis: Will hatches a cunning plot to slay Francis Dolarhyde, using Hannibal Lecter in his ploy. Bedelia voices concern about the perilous plan as Will continues his game with Hannibal, though Will may have to face his darkest fears.

Our Thoughts:  The season finale beings with Dolarhyde testing Reba and realizing that he can’t trust her. In response, he sets the house on fire and, not wanting to watch her burn, shoots himself.

The drama continues as Hannibal congratulates Will on the job he did on Chilton and asks him if it was good to see him.

In an unexpected turn (unless you read the book), Will is attacked by the not-acutally-dead Dolarhyde.  The two have a talk, and Will sets the stage for Dolarhyde to take down Hannibal.

The sassy-science team explains how the Tooth Fairy fakes his death in the most amusing way possible. I’m really glad they included them in the finale.

Will only tells Bedelia his plan and she doesn’t believe he will be successful. Alana offers Hannibal a deal in exchange for cooperation with a trap to catch Dolarhyde. He agrees, but insists that Will ask him nicely. Hannibal is more than menacing when threatening Alana with the prospect of his actual escape.

Will, Alana and Crawford plot to kill both Dolarhyde and Hannibal, and you can’t help but feeling that this is all going to work in Hannibal’s favor, not theirs.

Things go as Will planned, and the pair wait for the coming of the Dragon. Hannibal confronts Will, knowing that he was real intentions were, and Will admitted what he had been planning.

The end is bloody and beautifully disturbing. Things are wrapped up nicely, and yet the end is left open. Siouxsie Sioux wrote an exclusive song for the final scene. If this is the end for the series, it is a wonderful way to end it. However, I do not think that this is the last we will see of Hannibal and Will. Here’s hoping for more ‘Hannibal’ in the future, Fannibals!