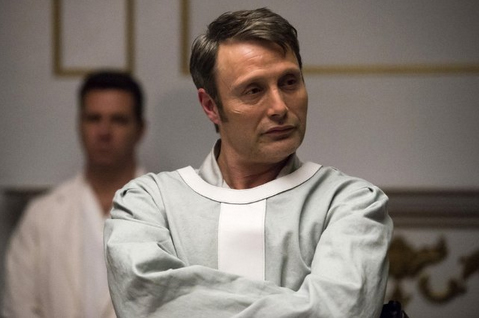 Synopsis: The FBI enlists the help of Dr. Fredrick Chilton in hope of drawing Francis Dolarhyde into an ambush; Will’s empathy for Dolarhyde impacts his psyche.

Our Thoughts:  This week begins with Will meeting with Bedelia. Will wonders if Hannibal might be in love with him, and Bedelia seems to think he is.

Crawford meets with Hannibal, while Dolarhyde spills his blood for the Red Dragon. Chilton later visits Hannibal to express his anger and berate him fir his public discredit of him.

Crawford, Will and Alana get Chilton to help them crafting a story to give to Freddie for publication, in order to draw the Tooth Fairy out of hiding.

Dolarhyde abducts Chilton out of rage over the article in the Tattler.  He forces him to view his “art” and demands that he tell the world the truth about him, after which he exacts some rather horrifying revenge.

Hannibal’s reaction when they find out what he did was rather amusing.  Despite being in jail, Hannibal is manage to have quite a lot of fun. Will doesn’t take it quite so well and ends up back in the chair in Bedelia’s office. Dolarhyde tells Reba exactly who he is.

Both Raúl Esparza (Chilton) and Richard Armitage (Dolarhyde) give amazing performances in their scenes together. The acting in the series is always excellent, as fans well know, but as things get more intense, the actors are really going above and beyond.

Only one episode left, Fannibals! How will this season wrap up? Will they get Dolarhyde before he kills anyone else? Will Hannibal have the last laugh? Your guess is as good as mine. See you next week for the season finale,“The Wrath of the Lamb”, Fannibals!