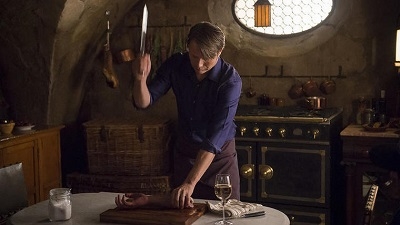 Synopsis: Will Graham continues his search for Hannibal Lecter, making his way to Hannibal’s childhood home in Lithuania. Meanwhile, Jack Crawford arrives in Italy, hoping to find Will and intervene before tragedy strikes again, and Bedelia warns Hannibal against unraveling his new life.

Our Thoughts: Today’s episode brings Hannibal and Bedelia pondering their futures, and Hannibal’s impending capture. Will searches for Hannibal in the one place Hannibal says he can never go – home, by which he means his childhood home in Lithuania.

Tonight’s (first) dinner with the Fell’s was especially humorous.  Hannibal seemed more impulsive, however it’s all apart of his bigger plan, as Bedelia is quick to catch on to.

Jack is back and he goes to Italy to look for Will. Pazzi tries to get him to join his quest, but to no avail.

Thomas Harris’ book “Hannibal Rising”, fourth book and prequel to the series, is touched upon with the introduction of Chiyoh, played by Tao Okamoto, and the tragic story of Hannibal’s younger sister Mischa.

Meanwhile, Will is becoming more like Hannibal than he realizes. Hannibal and Bedelia talk a lot about betrayal and forgiveness, and the one way he would be able to forgive Will.

I’m realizing those ‘special’ dinners Hannibal puts together really lighten what otherwise would be a very dark and somber tone, despite those meals being the ultimate reason for that tone. The perfect marrying of a very dark story with utterly black humor is what really puts this horror show above the rest for me.

Next week’s episode looks like it will be even more delicious, with the gathering of Hannibal’s surviving victims, who are looking to even the score. See you next week for “Aperitivo”, Fannibals!