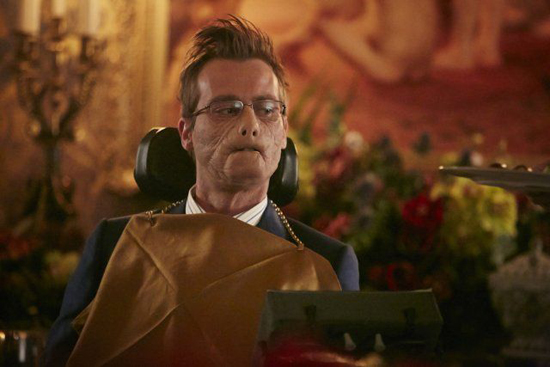 Synopsis: Bedelia and Hannibal feel their time in Florence is coming to an end; Jack questions Will’s loyalty.

Our Thoughts: We pick up tonight, post-fight between Jack and Hannibal. Pazzi is of course dead. Jack and Will have to figure out what to do next.

We join Mason for dinner, which I found to be far more tasteless than meals at Hannibal’s. Bedelia meets Chiyoh for the first time, and the two realize they were both metaphorically caged by Hannibal in a similar fashion. Immediately followed by a bizarre scene of Bedelia drugging herself, as Will and Jack show up at her door.

Will and Hannibal meet face to face and talk for the first time the season. Seeing them talk about their strange connection was one of many highlights of the season thus far I think.

Margot and Alana get together unexpectedly in a kaleidoscope love scene that was incredibly artistic, as is everything in the series.

Chiyoh makes surprising move after another and I have not been able to predict what she will do next. Though, after the fact, it makes sense, as Hannibal talks about it with Will.  As Hannibal takes care of Will’s wound, there is an artsy ink blot-style scene merging the two, which seems to be a theme of the episode, considering that previous love scene between Margot and Alana.

Jack joins Hannibal and Will for dinner. The story takes an insane and unexpected turn, using inspiration from a famous scene in the ‘Hannibal’ film/book. We are left with a bit of a cliffhanger as to what exactly happened. The teaser for next week gives us some big clues as to where things are heading next, at least for those who know the original storyline. I was speechless as the episode closed, as I suspected most fannibals were. I honestly can’t wait for the next episode. See you next week for ‘Digestivo’, fannibals!