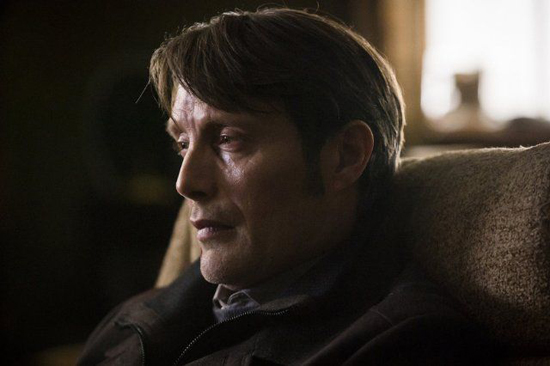 Synopsis: Captured in Italy, Hannibal and Will are brought to Muskrat Farm, where Mason awaits.

Our Thoughts: This past Saturday’s episode picks up with showing us exactly how Will and Hannibal are captured and what exactly happened at that dinner table. Mason’s crew capture Will and Hannibal, while Chiyoh arrives just in time to save Crawford.

Once on the farm, Mason tells them explicitly what he plans to do with each of them. Needless to say, it’s incredibly grotesque. Hannibal is clearly amused at the whole plan, and the whole scene was one of the highlights of the episode.

Mason tells Margot that he had implanted one of the eggs he stole from her in a “surrogate”, which turns out to be worse than you can imagine.

While Mason puts his plans into action, Margot and Alana form a plot with Hannibal to save Will. The way it all goes down was even more horrifying and incredible than the book/film from 2001. I never gag at anything in horror anymore and am quite used to extreme gore, however that nearly made me gag. I commend the Hannibal crew for bringing true horror to network TV.

The episode ends with Hannibal turning himself in, just to spite Will and allow him to know exactly where he is and how to find him. Something Will was determined to be ignorant of. Next week we begin a new chapter for the series. Hannibal will be the one behind bars this time and the “Tooth Fairy” is coming. “Digestivo”was great, and I’m excited to see what next week’s episode, titled “The Great Red Dragon,” will show us. See you next week fannibals!