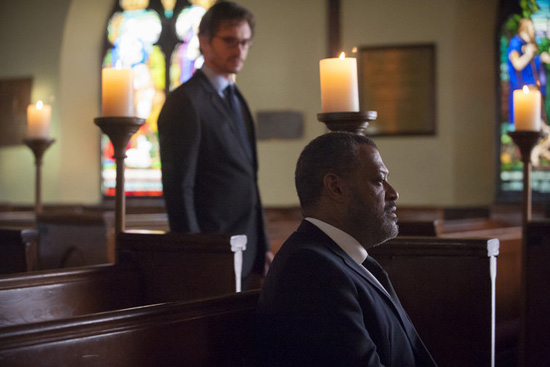 Synopsis: Alana, Dr. Chilton and Mason Verger are ready to get their revenge against Hannibal.

Our Thoughts: Mason Verger and Frederick Chilton return tonight for “Aperitivo”. Both of them managed to survive, miraculously. This season actor Joe Anderson takes over the role of Mason Verger, who was played by Michael Pitt last season. Many viewers may not even notice this fact, due to Verger’s disfigured state. He clearly takes inspiration from Gary Oldman’s portrayal of Verger in the 2001 ‘Hannibal’ film and is a very good fit for the role as well.

The majority of the episode takes place in the time prior to Will’s trip to Europe. It begins when he was still in the hospital following the attack. We also see Dr. Alana Bloom again finally. She too survived.

Just when you didn’t think they could squeeze any more characters in, Margot Verger returns as well.

The tension is palpable when Will runs into Alana at Lecter’s home. I’m betting that conversation she has with Mason later pissed off a lot of fannibals. It angered me at the very least. As does their unlikely new partnership.

Jack’s story takes a tragic turn, with some of the saddest scenes in the show to date.

The most grotesque scene this episode when we see Mason’s face during reconstruction surgery.

For those that have read the book, we know roughly what Mason’s plans for Hannibal are. For those that haven’t, you have quite a surprise ahead! I can only imagine what incredible touches Bryan Fuller will add to it! See you for “Contorno” next week, Fannibals!