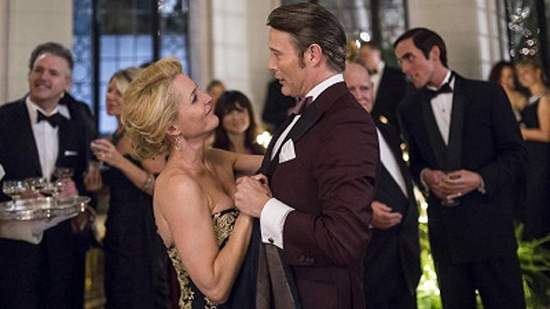 Synopsis: After the devastating bloodbath at Lecter’s home Hannibal establishes a new life for himself in Italy along with the company of his own psychiatrist Bedelia.

Our Thoughts: ‘Hannibal’ season three picks up with Hannibal living a new life in Europe. Free to do as he pleases, Dr. Lecter is doing what he does best, continuing to craft his gourmet dinners. He cooks up a slab of choice meat before the first commercial break even begins.

Going by the names Dr. Fell and Mrs. Fell, Hannibal and Bedelia are posing as a married couple. It was quite amusing to see them discuss the prospect of Hannibal eating someone they know. Just the usual post dinner conversation in the Lecter household.

Black and white flash backs to last season give the continuing story perspective, as we see the reality of Hannibal and Bedelia’s situation. The surreal imagery which we are accustomed to from previous seasons continues to give a deep and artistic atmosphere to the story.

One of my favorite scenes from the episode was the hilarious dinner scene the “Fells” have with Anthony Dimmond. The cannibal humor and inside jokes with the audience never get old.

A portion of the content of the episode comes directly from the 1999 novel ‘Hannibal’ by Thomas Harris, which is the third book in the series. Until this season, most of the content has been inspired by the first book, 1981’s ‘Red Dragon’.  As a fan of the books and films, it is always interesting to me to see the elements of the story that have been changed and reworked. The time line of events from the original story have been shifted quite a bit.

Mads Mikkelsen and Gillian Anderson have an excellent dynamic and dramatic on-screen chemistry.  We see very little of the other cast in the premiere and by the end of the episode we still don’t know who survived last season. However, the preview for next week includes some spoilers. Despite the writers making us wait, the episode was extremely satisfying. I can’t wait to see where the hunt for Hannibal Lecter takes us. Until next week, Fannibals!