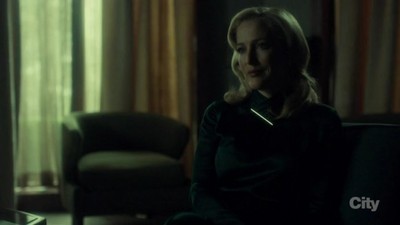 ‘Hannibal’ Weekly Wrap Up – “…And the Woman Clothed in Sun”

‘Hannibal’ Weekly Wrap Up – “…And the Woman Clothed in Sun”

Synopsis: Carvings symbolizing the Great Red Dragon are retrieved from crime scenes, casting light on Francis Dolarhyde’s warped psyche. Meanwhile, both Dolarhyde and Will seek the wisdom of Hannibal Lecter.

Our Thoughts: This week’s episode picks up with the phone call Francis makes to Hannibal. He imagines he is speaking to him face to face, in an intense scene in which we see the dragon in all his glory.

Bedelia returns, speaking to a group about her experience with Hannibal, claiming she was a victim. Will sees right through her and confronts her on it.

Francis takes Reba on a bizarre date of sorts, to a zoo so that she can touch a tiger who has been put to sleep while they work on a tooth. Following the date, the two have a  romantic encounter he was clearly not expecting.

Meanwhile, Hannibal manages to make a phone call in which he manipulates Chilton’s secretary into giving him Will’s home address.

Will meets with Bedelia again and she claims she was giving covert treatment to Hannibal. The two discuss the rationale behind helping the weak versus destroying them. At the same time, Bedelia remembers her session with Neal Frank, an ex-patient of Hannibal’s played by Zachary Quinto, who explains how he believes Hannibal wronged him, and made his situation worse than it already was. He ends up swallowing his own tongue, and Bedelia’s arm along with it, as she tries to save him. Quinto gives an excellent performance as the disturbed ex-patient.

Francis goes to a museum to see the Great Red Dragon painting in person. In true psychotic fashion, he eats the priceless painting. Will happens to be going to see the painting at the same time and they meet face to face. He assaults Will and disappears.

Will they be able stop Francis before he strikes again? What is Hannibal planning by getting Will’s home address? So much can happen in the next few episodes. Until next week, Fannibals!