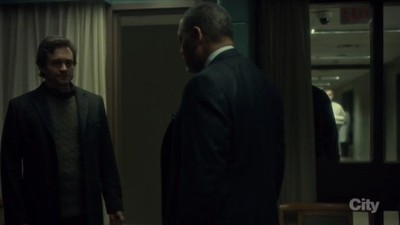 ‘Hannibal’ Weekly Wrap Up – “…And the Beast from the Sea “

‘Hannibal’ Weekly Wrap Up – “…And the Beast from the Sea “

Synopsis: With a full moon approaching, Jack and Will are certain that Francis Dolarhyde will strike again but they lack a solid lead; Alana gives Hannibal a chance for redemption.

Our Thoughts: This week we begin with Will and Jack talking about what Francis did last episode. Will realizes that Hannibal must know who he is and may have even treated him.

Hannibal informs Francis that Will has a family, much to his delight. So now we know what Hannibal’s game plan is.

There’s a great scene of Francis transforming into the Great Red Dragon. He then proceeds to date Reba and watch his “movies” at the same time.

In a sad turn of events, Francis begins his ritual on Will’s family. Hannibal seems particularly sinister in his next meeting with Will because we know what he did.

Molly shows that she is extremely clever. Francis fails fortunately, but he doesn’t escape punishment from the dragon.

Alana knows that Hannibal has been in contact with the Tooth Fairy and offers him a chance to make up for what he has done. He takes it, however, he still manages to have his fun. Alan punishes him for his insubordination and we get our glimpse of Hannibal in the iconic mask for the first time.

Upon their next meeting, Hannibal admits to Will what he did. Will is visibly raging inside. Despite the clear anger they have towards each other, Hannibal helps Will to gain further insight into what Francis is really doing and why he’s doing it.

How will this end for Francis? It won’t be pretty, no matter what happens. His life is tragic, so you know that his end will be as well. Until next week, Fannibals!