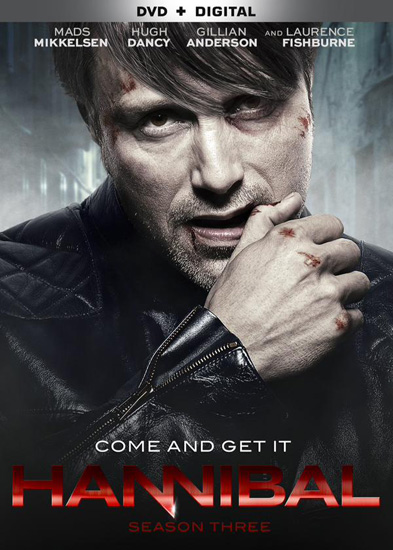 ‘Hannibal’ Showrunner Bryan Fuller Tweeted today that ‘Hannibal’ season 3 will be coming to DVD/Blu-Ray December 8th. It will include over 12 hours of extras.

Fuller posted  “HANNIBAL SEASON 3 DVD/BluRay AVAILABLE DECEMBER 8 – OVER 12 HOURS OF EXTRAS AND THE NEAR KISS WILL BE INCLUDED.”

Season 3 of ‘Hannibal’ stars Mads Mikkelsen, Hugh Dancy, and Gillian Anderson. Events pick up a year after season two, with Will Graham (Hugh Dancy) on the hunt for Dr.Hannibal Lecter (Mads Mikkelsen).  NBC cancelled the series shortly after the start of the third season. The future of the series is still unknown, however, Fuller has given fans hope that the story may continue in one form or another in the next few years.