When news of the remake started to circulate through the horror community, many fans wondered if the legacy of the great actor and his portrayal of Loomis would be honored.  Thankfully, Loomis’ voice made it into the film, but was the audio captured from a previous film or outtakes?  As it turns out, the recording of “the good doctor” was performed by voice actor and comedian Colin Mahan.  In this exclusive interview, Mahan discusses how he landed the job, the pressure involved in recreating the classic voice, and how comedy and horror are not too far apart on the entertainment spectrum.

Horror News Network: How did you become involved with voicing the Doctor Loomis character in the new Halloween film?

Colin Mahan: Out of the blue I got an email from someone claiming to be working on a new Halloween and who had somehow heard I did Donald Pleasence. My first thought was that it was a really specific phishing scam. I don’t have any Donald Pleasance online, and he is such a weird very distinct and niche impression that whenever I do him onstage it usually gets two comics laughing or silence. Then I Googled the guy, and he was in fact a movie producer!

At first I thought it was for a little audio for the DVD release of the original movie, and that was super cool. But then it turns out it was for the new sequel, and I was blown away. I immediately became very excited and incredibly panicked.

So I send some audition lines to the team and they like it. Then months go by, I try not to bug them, and I’m just trying to remain positive but also not think about it. A lot of things fall through in showbiz so you try to say ‘ez come, ez go.’ It could be they rewrote Loomis out, or someone hated my impression, or they had to do it quickly and grabbed another actor, etc etc. There are a million reasons. But then finally they’re finally ready to record, I head down to Blumhouse and do the lines with the director and sound engineer, and I get my check. So those parts are definitely concrete. They happened. But still I wait and try to forget about it, because the other thing that happens is that you’ll do a bit, but it might get cut out. You just have to get ready for that. Finally, I see the movie and it’s truly in there, and my name is even in the credits! That was a delight. It’s definitely the coolest thing to happen so far in my career.

I am now working on my Dr. Sartain and hopefully in 40 years I can do his VO in the re-sequel.

HNN: Donald Pleasence was a legendary actor, and his distinct voice was a key attribute of the Loomis character.  How did you prepare for the role and bringing Loomis back to life?

Mahan: Rehearse the lines excessively and practice doing Donald throughout my day. When I’m really working on an impression I try to do everyday lines as the person, not just the lines we all know and love, so I understand how that person will say anything. So I recited the famous Donald lines like, “I shot him six times! The woods are lovely dark and deep. You are the Duke of New York and you’re A number 1!!” but also just normal things like ‘I’ve got to pour this goddamn coffee into my evil cup and this Amazon package is evil on the porch and now I’m putting evil items into my goddamn MANPURSE GODDAMMIT!’ Every Donald line always ends with yelling.

Actually, I did do a lot of ‘crazy Donald’ line readings that they didn’t use in the movie, maybe it’ll show up on the DVD. 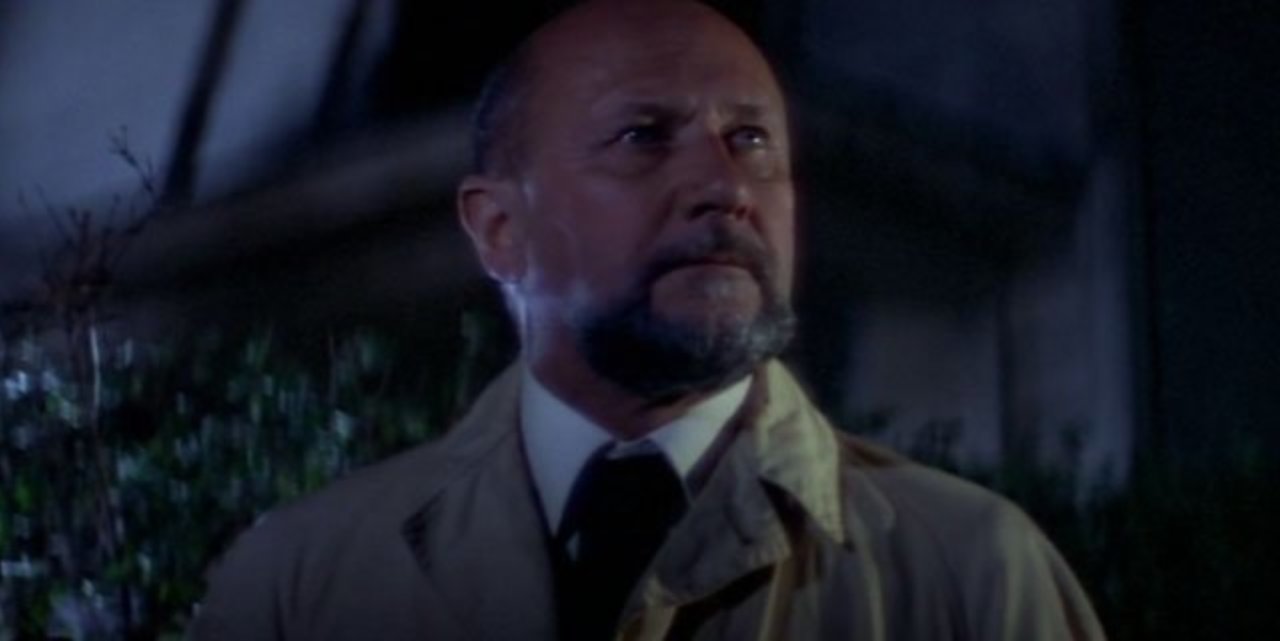 HNN: Were you a fan of the franchise before this job?

Mahan: Yes! That’s why this is such a thrill. when I was younger I used to just run around as Loomis. Donald Pleasance is one of my favorite actors and I love all John Carpenter movies. He was my favorite director when I was a kid. It’s hard to pick my favorite film of his. Halloween is great, but I did love Halloween 2, because it had a lot of Loomis running around and yelling at the sheriff and saying words like “Samhain” which was super great in his voice. Plus that’s when it really became like “Loomis VS Michael.” I even liked Halloween 3. So it’s kind of a childhood dream realized to be a part of this movie. Plus I really liked the movie, they obviously crafted the film with a lot of attention and care. I thought Jamie Lee Curtis was perfect.

HNN: You are also a comedian. Do you think that there is a thin line between comedy and horror?

Both horror and comedy work well when they move slightly faster than you or shock you in an unexpected way. A good scare is like a good punchline in that it’s great when you don’t see it coming.

I think both genres are gut level and best left unexamined. Once you start to dissect why it worked it loses the effect. Everything is so over-scrutinized now and blathered incessantly about in think pieces. “Why was that funny? Why was that scary?” Why do we need to understand it? Just go along for the ride. Not to say always check your brain at the door, but what is the fun in trying to be jaded and overthinking it? It’s escapism, so escape.

Also, some of the best jokes or scares stick with you later, like a John Carpenter ending where you’re thinking of it for decades. “I can’t believe John Nada was killed a the end. What happened after he exposed the aliens?! Did humanity fight back?!” “Was MacReady the thing, or was Childs the thing?””Did Chevy Chase ever get his molecules back?” (for JC fans only).

HNN: How did you become an actor known for your impressions? What other voice work have you done in the industry? What other people or characters do you enjoy doing impressions of?

Mahan: Lonely childhood + hours of unsupervised TV and movies + William Shatner = explosion of nerdiness fit only for a comedy stage or writer’s room! I started out in the 90s during the dot-com boom, and thank god for that because it let a San Francisco comic stay in San Francisco for awhile instead of prematurely going to LA. There were animation and production houses in SF that you could actually earn a living writing for until they irresponsibly burned though millions of cash and imploded the economy. But eventually I did move to LA and did a lot of cartoons and stuff.

Current impressions are The Rock, Jack Black, Vin Diesel, Adam Driver, Kurt Russell. I still love doing Tom Cruise. And Bruce Willis is sort of my flagship impression but we are both too old now to matter. The best thing about doing Kurt Russell is that it translates pretty easily into a Wyatt Russell so I’m extending my viability with the youth market!

In the 90s when I started out, impressions were considered sort of gimmicky and hack, like parlor tricks, but they were also sort of rare. I took a lot of flack from other comics because the thinking went that impressions make it easier to delight an audience and that’s not fair, it’s like magic or props. But I always had sort of a sci-fi weirdo angle to my comedy so it offset that. I didn’t really do ‘What would happen if Ah-nold was at the grocery store?” my stuff was more about “What would happen if Ah-nold stumbled onto a plot about a terrible conspiracy in which humanity is enslaved by a global conglomerate run by Michael Caine? Would Nicolas Cage have to perform an elaborate show tune? I think that would go something like this…” So that had the effect of negating any goodwill earned by my impressions and it served to alienate and confuse audiences, which made them hate me, which made the other comics like me. At the same time, they also grudgingly liked my impressions so after an extended period of psychological discomfort, I was accepted into the SF comedy scene and everyone has regretted it ever since.

Nowadays, YouTube has given a platform to many many impressionists of varying degrees of competence, so it’s kind of like ‘who cares?’ But their still is a visceral thrill when a live audience is surprised by the voice I’m doing. Live is the best. It’s exciting. Especially when I do my Burn Notice bit, and people are like ‘How the hell could Burn Notice have been the number one show in its time slot for years and no one has ever seen it!? Who was watching Burn Notice?!’

HNN: Any projects that you are currently working on?

Mahan: Yes, I have a voice over of an ex-president in an upcoming indie film (I’m sort of Hollywood’s go to guy for old, obscure voices), and I’m doing an audio sketch series with my pal Al Madrigal and some other folks. And of course I’m pitching ideas to Blumhouse about how to keep Loomis in all future Halloween movies. Maybe a Loomis animated series?