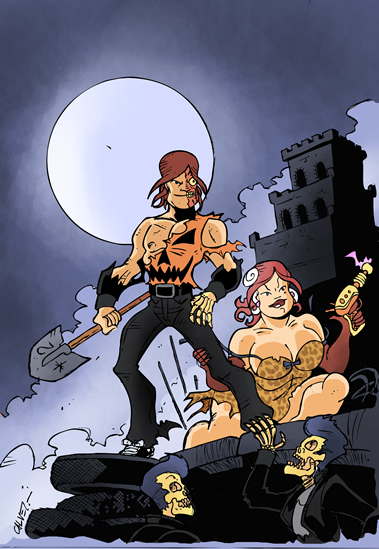 As Halloween draws closer we thought it would be a good time to catch up with Halloween Man creator, Drew Edwards to talk about the series.

Horror News Network: Hi Drew, it has been a little bit of time since we last chatted. How are things going with Halloween Man?

Drew Edwards: Things are going great! Last October we signed a deal with Monsterverse Entertainment to relaunch Halloween through ComiXology. The results have been amazing, with increased awareness of the characters and a renewed zeal from the creative team. After over a decade of toughing it out, we feel like we’ve finally arrived.

Horror News Network: For those that may not have had the chance to check out Halloween Man, can you explain to our readers, who he is and what he does?

Drew Edwards: “Halloween Man” is Solomon Hitch, a man killed on Halloween night and brought back to life by black magic. He has the power of the horror movie sequel, meaning he you can smash ‘im, slice ‘im, dice ‘im, and he’ll always come back for more. He also has a busty, full-figured super-scientist girlfriend named Lucy. Basically, picture Doc Savage in the body of a Coop pin-up and you get the idea. Together they smash evil, save worlds, and possibly their own souls too.

If you like your comics quirky, I think you’ll find a lot to like here. Outside of the obvious appeal of “Hey, monsters!” the comic has been noted for its heart and off-beat sense of humor. It’s a horror story, a superhero story, a love story, and a comedy all at once. I have a lot of love for the misfits of our world, this is me putting the spotlight on that.

Horror News Network: Can you tell us a little bit about the upcoming giant-sized Halloween Man issue?

Drew Edwards: It drops on ComiXology October 1st and I can’t think of any better way to kick off the Halloween season! This bad boy is 147 pages, features two all-new stories, and a whole slew of some of the best standalone stories from the web-comic. Plus, it’s only $1.99, so that’s a Halloween treat almost anyone can afford.

Horror News Network: Who’s the rest of the creative team involved in this issue?

Drew Edwards: I am the writer on most of the issue, although one of the new stories is penned by my friend Julian Dossett, who is a great rockabilly and blues singer. There is art from Sergio Calvet, David Baldeon, Nicola Scott, and a lot more. Like I said, this is all about bang for your buck!

Horror News Network: After the giant-sized issue wraps up you have another big storyline planned for Halloween Man which includes vampires. Can you tell us a bit about that?

Drew Edwards: It’s entitled “the Terrible Fruit Bats” and as you can guess from that name, the vampires in the story are far from what you’d expect. Now, long time Halloween Man readers already know I have a real fondness for vampires as villains and have used them quite a bit. But this is a first real long look at the creatures and I’m using as a chance to kind of turn a lot of genre tropes on their head while still including a lot of things you’d expect from a vampire story. I’m a big fan of Universal and Hammer vampire movies, so I got to pull out a lot of that imagery. It starts out a typical, pop-arty Halloween Man story and quickly gives away to rain and fog. Plus, if you’re a horror fan, you’ll see references to a lot of the great classics. I even got in an homage to “Invasion of the Body Snatchers.”

Horror News Network: Do you expect this vampire story-arc to be a great jumping on point for new readers?

Drew Edwards: It’s as good a jumping on point as you’re going to get. It includes all of our central cast members, a user-friendly monster, and each issue is only $1.99. I know there are a lot of vampire fans out who will find this to be a fun story. But even if you hate vampires, you should still find a lot to love here.

Horror News Network: When do you expect that to be released?

Drew Edwards: That is going to start up in November. It’s our second long-form story after a few standalone issues.

Horror News Network: Are physical copies available of these books or are they only available digitally?

Drew Edwards: Not right off the bat, no pun intended. At the moment, Halloween Man is exclusively digital, but if fan support continues to grow we’d like to make the leap back into print.

Horror News Network: In closing, what would you like to say to our readers about Halloween Man?

Drew Edwards: We pour our hearts into this each month and I think that shows up on the page. Our prices are low and our page count high. If you haven’t already, give the comic a try, I think you’ll dig it!

Horror News Network: Thanks for your time, Drew! Best of luck with the upcoming Halloween Man comics.