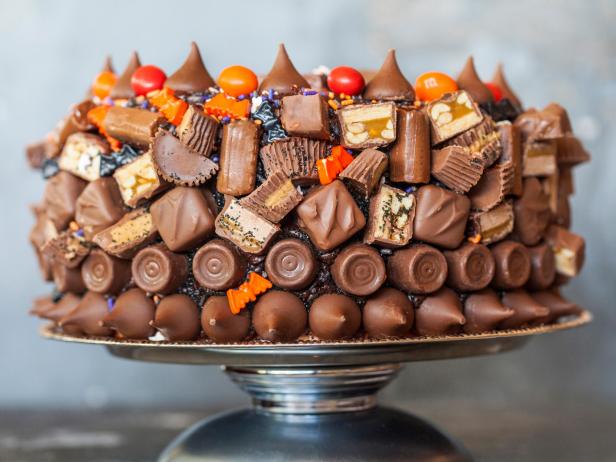 Food Network is well known for their hunger-inducing programming year round, but those who love Halloween and sweets will be happy to hear that Halloween Baking Championship and Halloween Wars will both return this season, and will also be joined by “… five sensational specials capturing the Halloween spirit for over 20 hours of thematic holiday programming.”

According to the official press release, Halloween Baking Championship returns on Monday, September 24 at 9 pm, and will again be hosted by John Henson (Talk Soup), along with expert judges Carla Hall, Lorraine Pascale, and Zac Young.  Eight bakers with a penchant for the ghoulish will “… show off their creepiest, scariest skills over six episodes with bone-chilling challenges.” The winner of Halloween Baking Championship will walk away with the $25,000 grand prize (and the envious glances of their fellow competitors).

Food Network’s companion series to Halloween Baking Championship, Halloween Wars, premieres on Sunday, September 30 at 9 pm.  The former host of Cake Wars, Jonathan Bennett, returns to host “…as six teams each made up of an expert pumpkin carver, a cake artist, and a sugar master battle it out over five episodes to create Halloween-themed edible displays that are as scary as they are delicious.” Each display will be judged by cake decorator Shinmin Li, horror film special effects artist Todd Tucker, and “…a rotating panel of celebrity guest judges, including movie director Mick Garris (The Stand), Gaten Matarazzo (Stranger Things), and more, to determine which team takes home the grand prize of $50,000!”

And if you thought ginger bread houses were just for Christmas, think again!  Haunted Gingerbread Showdown premiers on Sunday October 7 at 10 pm, and will consist of over four episodes, hosted by Sandra Lee.  This new program will feature “…nine of the best gingerbread artists in the country against each other to create spooky gingerbread masterpieces that embody the season.”  Judges Jamika Pessoa and the always well-dressed Jason Smith will be joined by a series of guest judges including the queen of Halloween herself, Elvira,“Mistress of the Dark”, to ascertain who will be crowned the gingerbread master (and receive yet another $25,000 prize).

Just in case you haven’t had your fill of sugary treats by this point, Food Network has two additional specials: Halloween Cake-Off and Trisha’s Halloween Spooktacular.  Halloween Cake-Off is hosted by Ace-of-Cake’s Duff Goldman and premiers on Monday, October 8 at 10 pm where four bakers will “…construct an elaborate Halloween-themed showpiece cake that transforms from good to evil by either moving, bursting, shattering or even melting. The one that impresses judges Waylynn Lucas (Cake Wars) and Pichet Ong with presentation, transformation, and taste, will take home $10,000 and be crowned winner of the Halloween Cake-Off!”

Trisha’s Halloween Spooktacular (premiering on Monday, October 15 at 8 pm) features country star Trisha Yearwood “…as she shares eye-popping tricks and treats for the ultimate Halloween party. Along with her best friends, Trisha goes into full preparation mode for the ghoulish gala, from trying on costumes to preparing her most elaborate Halloween-themed dishes to checking out Nashville’s most popular Halloween-themed bar, Trisha’s guests will experience a night they will never forget, ending with a Zombie-filled, candy-coated Halloween jam!”

Check out the delicious trailer below and get some ideas for your own Halloween parties this year with the plethora of suggestions that these competitions are sure to provide.