Lane’s documentary closely examines the trails and tribulations of today’s most prominent organization for those looking to advocate for equal rights in a creative fashion: The Satanic Temple.  Lane details the origins of the group and the movement and, to a lesser extent, the original Church of Satan formed by Anton Szandor La Vey (more as background for how The Satanic Temple differs from La Vey’s showy, Hollywood style of devil worship that gained notoriety in the 1960s).  The vast majority of the documentary focuses on the modern breed of Satanist, who is primarily interested in defending civil rights, providing service to those in need (such as sock collections for the homeless), and keeping church and state separate.

And if you actually have the courage to present yourself as a Satanist, all Hell usually breaks lose.  The consistent message of the entire film is that people, even in the 21st century, go wild when you tell them you are doing anything in the name of the Devil.  The multiple clips from news programs and civic meetings clearly expose those who would “rail against Satan” as complete and utter nincompoops (in the case of the press) and as zealots who are willing to go so far as threatening violence to anyone associated with organizations like The Satanic Temple.

The individual who come across best in the documentary are the soft-spoken and diverse group of individuals who identify themselves as Satanists, in particular, their co-founder and prime spokesperson Lucien Greaves.  The documentary opens up by highlighting Greaves reluctance to take the stage as the official mouth piece of the organization.  Greaves comes across as a shy, reserved individual, much different than the stereotypical image created by La Vey (and Aleister Crowley before him).  The sincerity and dedication to the cause that many of the members (including some whose faces are never revealed in the documentary for fear of persecution) exhibit is very real.  Their mission statement/list of accomplishments (as indicated on their  website) features some particular “non-evil” activities, and The Temple has “…opposed The Westboro Baptist Church, advocated on behalf of children in public school to abolish corporal punishment, applied for equal representation where religious monuments are placed on public property, provided religious exemption and legal protection against laws that unscientifically restrict women’s reproductive autonomy, exposed fraudulent harmful pseudo-scientific practitioners and claims in mental health care, and applied to hold clubs along side other religious after school clubs in schools besieged by proselytizing organizations.” 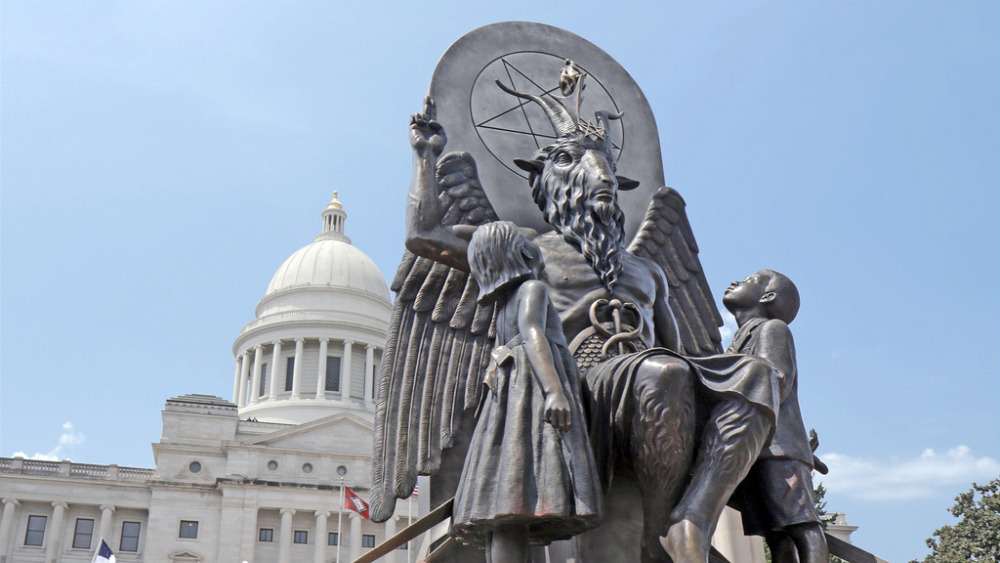 These goals and initiatives are far from the black masses and child sacrifice stories that fueled “the Satanic Panic”of the 1980s (which is briefly referenced in the documentary with some classic Geraldo Rivera and police training video clips), but the people who appear at town councils and on courthouse steps to provide their version of “testimony” still haven’t gotten the memo that all of the hype and terror in the Stranger Things decade never actually came true.  As always, letting your opposition prove your point for you makes a crystal clear case for the validity of The Temple’s arguments in the numerous clips that harken back to a Middle Age’s mindset, much more than a 21st century one.

In every case, whether it is erecting a giant statue of Baphomet to stand side-by-side with a enormous stone tablet of the Ten Commandments or the establishment of an after school program for children interested in Satanism to compete with an after-school Bible club in a public school, the message is the same:  remove your religion’s influence on secular institutions, and we’ll remove ours.  Greaves states this in almost every meeting that he attends in the documentary, and the visceral reaction of the “concerned citizens” soon give way to legal opinions that naturally take a much more measured response.

The many victories are balanced with some stiff opposition and ongoing battles (including a falling out between Greaves and Detroit’s resident Satanist and former Satanic Temple compatriot, Jex Blackmore) and Lane tells the story of the organization and the divisions in American thought in an entertaining and engaging fashion.  Even if you don’t have a little “Sympathy for the Devil”, this documentary captures the American spirit of individuality, much more than the spirit of evil.

The DVD of Hail Satan? goes on sale on July 23 and is rated R.

No information on digital or streaming versions of the film are currently available.