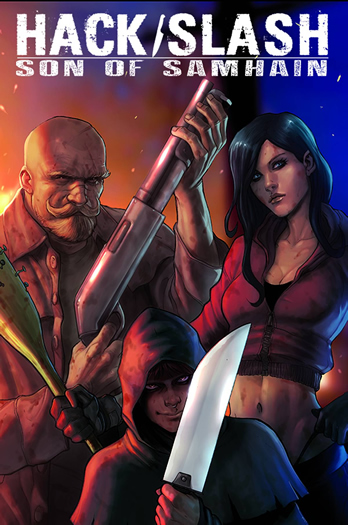 Synopsis: After escaping Morinto’s cave, Cassie and Delroy take to the desert to track the mysterious boy the monsters were holding captive. Their search leads them to the Scalpers, a gnarly group that doesn’t take kindly to visitors. Meanwhile, Morinto confronts the mythical God Beast.

Our Thoughts: With Hack/ Slash: Son of Samhain #2, Moreci and Seeley pick up right where issue #1 left off. Cassie is still as spunky and as fierce as ever.  This series really takes off in issue #2 with battles amongst men and beasts.  The plotline Moreci and Seeley are continuing to develop is fantastic.  There is without a doubt a parallel between the battles Cassie must face against these new demons, and those of her inner demons.

With the direction Cassie’s journey is taking and the new world she is entering, there is a lot of room for Emilio Laiso’s artwork to flourish.  He shows great detail and creativity.  He also provides all the vivid grit, gore and guts horror comic fans love.