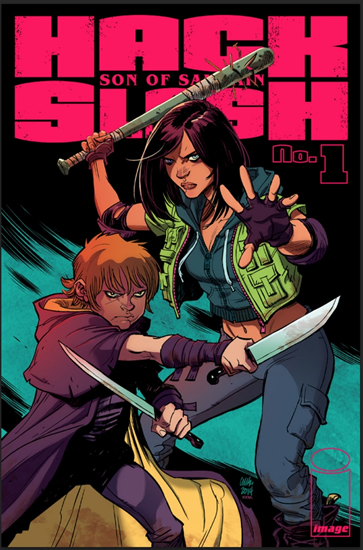 Synopsis: When a mysterious cult of monsters arises, Cassie is forced to return to the life she thought she’d left behind. Coupled with a new partner and faced with enemies unlike any she has battled before, Cassie must confront the darkness in the world—and in her own life—in new ways. The agents of evil never rest; unfortunately for them, neither does Cassie Hack.

Our Thoughts: That’s right horror comic fans, Cassie Hack has returned! Hack/Slash: Son of Samhain #1 opens up a new chapter in Cassie’s life.  While creator Tim Seeley is not at the helm, the team behind ‘Hoax Hunters,’ Michael Moreci and Steve Seeley prove to be very capable of taking us on this journey.  While it appeared Cassie left the war with slashers behind, this issue reminds of the scene in the Godfather Part III when Michael Corleone says ‘just when I thought I was out, they pull me back in.’ Cassie now finds herself up against a new ungodly foe that Hack /Slash: Son of Samhain #1 hints will be quite the force to be reckoned with.  Then again, Moreci and Seeley have not toned down any of Cassie’s edginess.

Laiso’s artwork does a fine job of complementing the story.  The more action packed scenes is where his work stands out the most.

Out on July 2nd, Hack/Slash: Son of Samhain #1 is a must have for Hack/Slash fans, as Moreci and Seeley hint  at even darker, and maybe even gorier days to come for Cassie.