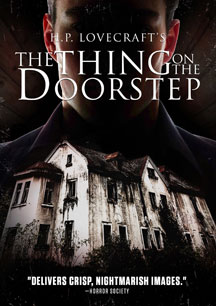 ‘H.P. Lovecraft’s The Thing on the Doorstep’ Comes to DVD November 18th

The award-winning feature, “H.P. Lovecraft’s The Thing on the Doorstep”, available on VOD from Midnight Pulp and DVD from MVD Entertainment on November 18th, 2014.

This new stylish, psychological horror film is based on the story by master of horror, H.P. Lovecraft. The film won Best Feature at the H.P. Lovecraft Film Festival and the prestigious H.P. Lovecraft Award at the Rhode Island International Horror Film Festival before being acquired by Leomark Studios for release. “The Thing on the Doorstep” was produced for Handsome Spyder, Inc./The Creatives by Tom Gliserman (director, director of photography and editor), Mary Jane Hansen (screenplay, actor) and Will Severin (producer, composer).

“It is true that I have just sent six bullets through the head of my best friend, and yet I hope to show by this statement that I am not his murderer.” Daniel Upton’s relationship with his friend Edward Derby is abruptly changed after Edward becomes romantically involved with enigmatic hypnotist, Asenath Waite. As Edward’s behavior becomes more erratic and events unexplainable, Daniel investigates. Is it madness…or something far more terrifying?