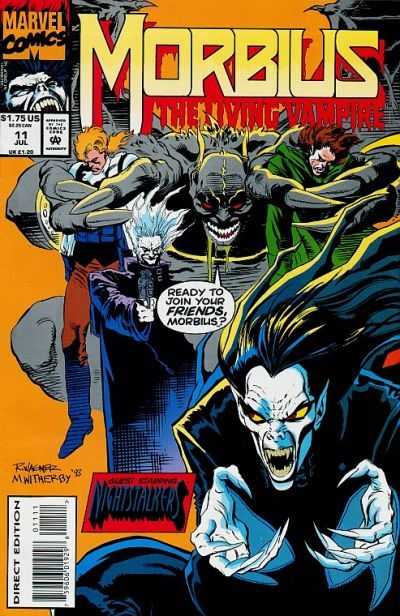 Our “Midnight Sons” feature could not be complete without talking about everyone’s favorite vampire, Morbius. Today we discuss the character with Gregory Wright, who was the writer/colorist on Morbius: The Living Vampire!

Horror News Network: How did you jump from the colorist to writer role on Morbius?

Gregory Wright: The editor was unhappy with the direction the current writer was taking the book and so was the artist Ron Wagner. Ron and I had been talking about how we thought the book should go.  The editor Bobbie Chase said she was going to replace the original writer and I said I’d love to take a crack at the book if she was going to replace the writer anyway.  She liked the work I was doing on Deathlok and Silver Sable and she liked the ideas I had for it, so I got the job.

Horror News Network: You really made Vic Slaughter such an interesting character. He was the meanest of the mean and made a perfect villain for Morbius. Can you talk a bit about the character?

Gregory Wright: He was created by Len Kaminski, but I really took him and amped him up to make a despicable  and unbeatable foe.. I wanted to write a character who was just so reprehensible and seemingly unstoppable.  I had a lot of fun devising ways to kill him off, only to have him keep coming back like the Terminator.

Horror News Network: Morbius read a page from the Darkhold in order to bring back Martine. The results were not what he expected as Martine was now very different. Can you talk a bit about writing this complicated relationship?

Gregory Wright: I guess I just kept find new ways to torture Morbius. She was the love of his life and I wanted to keep her just out of reach.  Was she going to be his undoing? His redemption? That was the fun part of it. I just never wanted Morbius to be happy.

Horror News Network: Since Morbius was a member of the Midnight Sons, his comic covers received the new cover symbol, the Midnight Sons dagger. Can you talk a bit about what that meant to you as a writer, having that on the cover?

Gregory Wright: Well…it was done before I came on board so I knew I was going to be working on a title that had to fit into a group of books and cross over with them quite a bit. It was fun to be part of a group of books and work with writers I enjoyed like Howard Mackie and D.G. Chichester. But the symbol didn’t really mean much to me.

Horror News Network: Crossovers within the Midnight Sons titles spanned many issues. Can you talk about the planning process that went into this with the other writers?

Gregory Wright: Ughh. Okay. We would get together in a large room and throw out as many crazy ideas as we could and hope that we could force some sort of story to come out of it that was worth reading. These were forced crossovers by Marvel and really just a gimmick to try and sell the line of comics.   We all worked together very nicely and tried to support each other’s story.

Horror News Network: Morbius always had great battles with Hannibal King and Blade. Can you talk a bit about his crossovers with the Nightstalkers?

Gregory Wright: I was asked to come up with a crossover with Nightstalkers because the editor wanted the line to have more unity and Nightstalkers hadn’t really been used as much as she would have liked in the other books.  This was fine by me, because I really enjoyed what D.G. Chichester was doing. It was fun to write Blade because he just never seemed to accept Morbius and really wanted him dead all along.

Horror News Network: Can you talk a bit about the crossover with Deathlok? It seemed like some really fun issues to write.

Gregory Wright: As I was the writer on Deathlok it was always very easy to utilize him in any story I felt like.  And again, it’s crass, but we were frequently asked to use guest stars to help sell the books, so I was happy to help out Deathlok by having him pop into Morbius. They both have a similar nose, so I guess it works…lol.

Horror News Network: Spider-Man has always played a big part in the life of Morbius. The two tangled in a few of the issues you scribed. Can you talk a bit about writing that?

Gregory Wright: Terrible. I love Spider-Man…however whenever you used him in a crossover you were forced to contend with and mention whatever his current status in his own books was. You couldn’t do anything very interesting without the Spider-Man editor nixing it.  Not to suggest the editor was at fault…it’s just how it goes when you want to use the company’s mascot. So he basically pops in and does generic shtick and wanders out of the story that will never be mentioned again.

Horror News Network: What was your favorite part about writing Morbius?

Gregory Wright: Mostly I was really happy to work with artist Ron Wagner, and be able to do a book with a more horror tone to it because I am a big fan of horror movies.  Originally we were going to make the book more psychological and romantic…but all the crossovers and executive orders to make the book more “commercial” sort of killed that idea. And the outside interference didn’t help the book to sell.

Horror News Network: With TV and movies being a huge part of Marvel these days, do you expect a Morbius movie anytime soon?

Gregory Wright: I don’t really expect it, but if NETFLIX were to do it, I think they might pull off a great version based on what they did with Daredevil and Jessica Jones.

Horror News Network: Do you think it’s time for the Midnight Sons to rise again?

Gregory Wright: I think it would have a better shot at being done right. We were really hindered by the comics code and Marvel’s own internal censorship and unwillingness to try anything that was really different. Plus, at the time, the books were really leaching off the success of Ghost Rider. Today I think writers would be encouraged to find more unique stories that could be told in a more mature fashion.

Horror News Network: Thanks for your time and the scares, Greg!