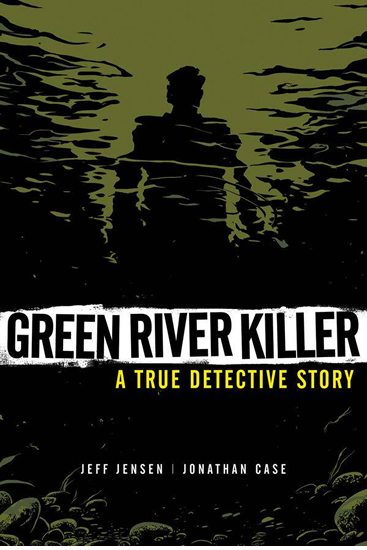 Synopsis:  A suspenseful and moving memoir about the search for one of the most prolific serial killers in history.

Our Thoughts:  There is no shortage of books, movies, and television programs that focus on the hunt for (or lives of) serial killers.  The world of comic books and graphic novels has always been littered with tales of killers run amok and the heroes that bring them to justice.  However, in recent years, more serious examinations of actual cases have been appearing on book shelves and comic book racks.  Starting with such seminal work as current Marvel superstar Brian Michael Bendis’ Torso (which focused on the hunt for Cleveland’s infamous Torso Killer in the 1930’s) and the more recent memoir, My Friend Dahmer by Derf Backderf, there has been no shortage of true tales of horror in the medium.

The latest entry, Green River Killer: A True Detective Story by Jeff Jensen and Jonathan Case combines the best elements of the police procedural drama and haunting memoir.  Jensen, the son of the chief investigator Tom Jensen, chronicles the search for the man responsible for the murder of at least 48 women in the Seattle area during the 1980’s.  The focus of this tale is the search and painstaking detective work that eventually apprehended the killer, but more importantly it is a story about the impact that such a search has on the chief investigator himself.   All of the doubts and second-guessing, the procedural red tape, and anguish come through on the illustrated page.  Tom Jensen, who dedicated his career to finding the killer, does not leave the experience without the scars to show for it.  The toll that it took on Jensen appeared to be profound, but the way that he coped with the horrors is reminiscent of classic Hemingway heroes, who bury their anger and frustration under a quiet, tough veneer.  This rings true in the case of Jensen and other detectives of his generation who internalized the troubling nature of their jobs, yet it comes across strongly in the text that this was one of the most difficult aspects of an already harrowing assignment.   Jensen often refers to a picture of his son as Don Quixote as inspiration to continue his hunt for the killer, yet he also recognizes the futility of much of the quest.

The interviews with the chief suspect are chilling and also delve into the bizarre “morality” behind his crimes.  Case’s artwork helps bring the suspect’s recollections a realistic and mundane aspect which helps the reader see the horror of the crimes as they unfolded.   The writer is also able to capture the enormity of the case and the impact that it had on his father without personalizing his role as the detective’s son so it while it works as a memoir, it does not come with the intrusive addition of the writer’s story as well.    This story stands as a welcome addition to the growing number of serious and enthralling looks at the disturbed individuals that commit these crimes and the men who peer into the abyss to solve them.