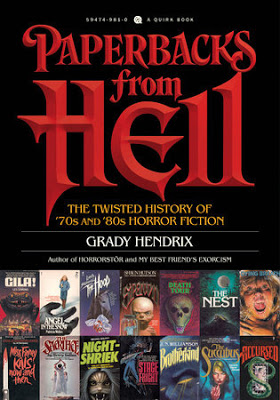 With the unprecedented popularity of Stephen King’s It adaptation, many Hollywood producers are frantically searching for the next horror story that will rake in cash (and potentially save their jobs) after a dismal summer movie season.

If producers turn their attention to the world of horror novels, I hope they all save themselves some time and effort pick up a copy of Grady Hendrix’s examination of the horror paperback boom of the 70’s and 80’s entitled Paperbacks From Hell.

In the introduction to his examination of these wild dime-store paperbacks, Hendrix (a noted horror novelist himself, and best known for the Ikea parody Horrorstor and his recent ode to the 1980’s called My Best Friend’s Exorcism) explains that the excitement and entertainment found within these treasures opens the reader up to “…a weird, wild, wonderful world that feels totally alien today, and not just because of the trainloads of killer clowns.”

Paperbacks from Hell is Hendrix’s love-letter to the novels, novelists, and illustrators that inspired him and a generation of readers.  It also serves as a “road map” for novices who may want to enter the dark recesses of used book stores and unorganized convention boxes in search of these relics from another age.  Hendrix is clear to point out that his purpose is to celebrate these titles and creators and shine a light on them in an attempt to preserve the rich forgotten legacy of this era of horror novels.

The book is organized by sub-genre, but it also flows (whether intentionally or unintentionally) in a chronological fashion as well.  Hendrix’s categories are broad in scope and at first glance may seem too generic, but once you examine the contents inside each chapter, the reader quickly discovers that much of the material contained within has never been recorded or discussed anywhere else. For example, in the chapter called “Creepy Kids”, Hendrix spends just enough time describing the influence of the Omen series on the sub-genre, but he then takes the reader through a number of forgotten titles and past the influence of “devil-child” narratives to ones that captured the fears of parents and adults everywhere by categorizing what type of homicidal children you may find in these novels including chemically altered, cloned, possessed, reincarnated, or just plain crazy children. 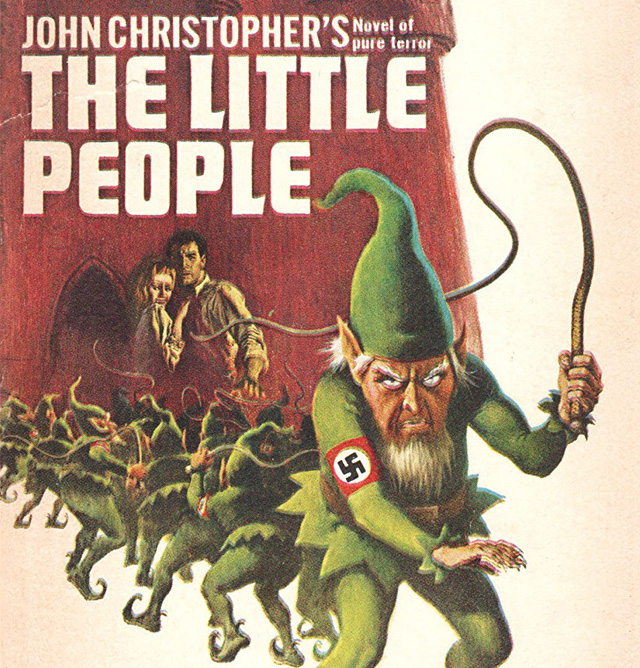 Inside each section, Hendrix also highlights a number or authors and illustrators who never got their due, many of whom wrote or illustrated dozens of titles from this era.  Although many of these creators are no longer with us, the attention paid to each is a thoughtful tribute to a generation who were not seen as “real writers or artists”, unlike today’s geek culture which has elevated genre writers and artists to celebrity status.

What really makes this collection entertaining, and not a “list”, is Hendrix’s wry sense of humor and unabashed love of these titles.  Let’s be honest, to do serious investigation of the subtext of John Christopher’s tale of Nazi elves (The Little People) would leave a lot of people behind, but Hendrix is able to celebrate the wacky nature of many of these stories and yet still chronicle them for posterity.

At the end of Hendrix’s collection, I did what he hopes many people do after reading Paperbacks from Hell: I searched for the titles that I was intrigued by.  As the author states in his introduction, “Though they may be consigned to dusty dollar boxes, these stories are timeless in the way that truly matters: they will not bore you”.

Actors Sign Up For Adaptation Of ‘My Best Friend’s Exorcism’

‘Horrorstör’ Optioned as a Feature Film