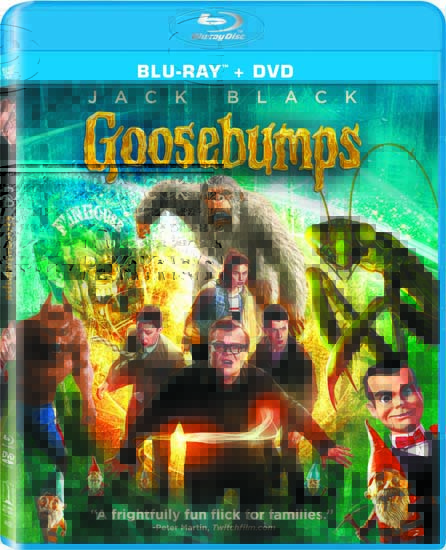 Culver City, Calif. (Dec. 7, 2015) – Kids and parents will believe in monsters when GOOSEBUMPS debuts January 12 on Digital and January 26 on Blu-ray 3D™ Combo Pack, Blu-ray™ Combo Pack and DVD. Based on Scholastic’s worldwide best-selling book series, with over 400 million copies in print, the motion picture adventure stars Jack Black (School of Rock) as Goosebumps author R.L. Stine, along with Dylan Minnette (Prisoners), Ryan Lee (Super 8) and Odeya Rush (The Giver). When Zach (Minnette) unwittingly unleashes magical monsters on the town, he must team with his new friends Champ (Lee), Hannah (Rush) and Stine (Black) to send the ghouls back where they came from before it’s too late. The film is directed by Rob Letterman (Shark Tale, Monsters vs. Aliens) and produced by Deborah Forte (The Golden Compass) and Neil H. Moritz (22 Jump Street). The screenplay is by Darren Lemke (Turbo) based on a story by star screenwriting team Scott Alexander & Larry Karaszewski (Big Eyes).

The Blu-ray™ Combo Packs and DVD have ‘spook-tacular’ special features, including an alternate opening and ending, deleted scenes, a blooper reel, and a casting gallery. In addition, there are two all-new featurettes (Beginners Guide to Surviving a Goosebumps Creature and Strange Things are Happening…On-Set) with Dylan Minette and Ryan Lee. Exclusive to the Blu-ray™ sets are All About Slappy in which Slappy talks about his favorite subject…himself!; and Creaturefied!, where makeup FX artist Steve Prouty demonstrates how to become your favorite Goosebumps creature.

Goosebumps by R.L. Stine, published by Scholastic, is one of the best-selling children’s book series of all-time. The official website is www.scholastic.com/goosebumps. For more information, visit http://mediaroom.scholastic.com/Goosebumps.

After moving to a small town, Zach Cooper (Minnette) finds a silver lining when he meets next-door neighbor Hannah (Rush), the daughter of best-selling Goosebumps series author R.L. Stine (Black). Stine is very mysterious and a prisoner of his own imagination – the monsters that his books made famous are real, and he protects his readers by keeping them locked up in their manuscripts. When the monsters are accidentally unleashed and begin to terrorize the town, it’s up to Stine, Zach and Hannah to get them back in their books where they belong!

Blu-ray and Digital Special Features include:

GOOSEBUMPS has a running time of 103 minutes and is rated PG for scary and intense creature action and images, and for some rude humor.

Visit Sony Home Entertainment on the Web at www.SonyPictures.com.