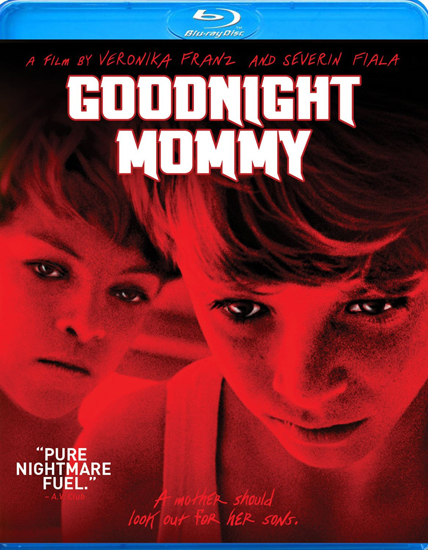 Synopsis: Twin boys move to a new home with their mother after she has face changing cosmetic surgery, but under her bandages is someone the children don’t recognize.

Our Thoughts: ‘Goodnight Mommy’ follows two boys whose mother returns home following surgery. She is covered in bandages, but more than that, she’s not acting like herself. She acts cold and strict toward the twins. The boys play a tape of her signing them to sleep, and you can hear the difference in the way she was treating them prior to her surgery. One of them dismisses her change in attitude as merely her reaction to the surgery and the other is worried about how different she seems.

The boys mother insists on complete quiet and  darkness so she can rest, in addition to no contact with the outside world. Her behavior gets progressively stranger and she treats the boys more harshly. Lukas and Elias begin having horrifying nightmares about her. They grow so suspicious of her that they bug her room so they can eves drop on her telephone conversations. She becomes abusive and they accuse of her of not being the real mother, at which point she physically attacks Elias and attempts to pit them against each other.

As the movie goes on, you get sucked in, wondering what happened to their mother and where it is all leading. It takes some very disturbing turns, however not in the way that you would predict. The result is an original and terrifying story with an ending that you don’t see coming. Susanne Wuest is incredible as mother and both Elias and Lukas Schwarz  are great in their respective roles as brothers of the same names. ‘Goodnight Mommy’ is an excellent psychological thriller and a must see for any horror fan!