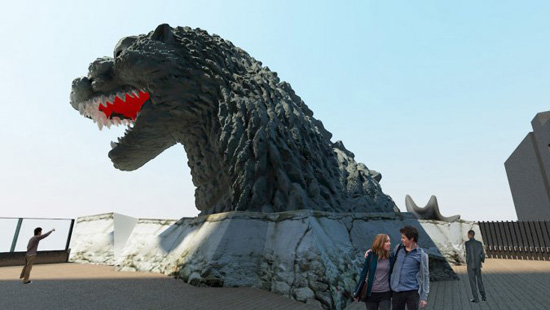 Godzilla was granted official residency and made a tourism amassador of Shinjuku, a district he destroyed at least a few times in his films, with the unveiling of a full scale Godzilla head 170 feet above central Tokyo. The head, which roared and breathed smoke during it’s ceremony, is 80 tons and based on the Koichi Kawata film Godzilla vs Mothra from 1992. Kawata, who directed five films in the Godzilla series, died last December.  Toho is rebooting the Japanese part of the franchise after the global success of the Legendary Pictures’ Gareth Edwards ‘Godzilla’ film from last year.  Godzilla was presented with a a special resident card for Shinjuku by Mayor Kenichi Yoshizumi, and the head of local tourism promotion named him and ambassador for the local area.  The monster is located atop the 31-story Shinkjuku Toho building. On April 17 the capital’s largest Toho Cinemas Shinjuku is opening inside the same building, along with a high-rise hotel.