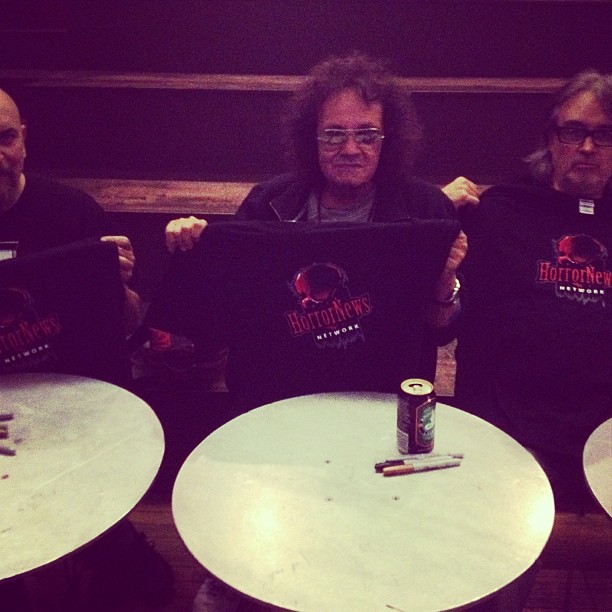 Goblin, Live at the Music Hall of Williamsburg

Goblin, Live at the Music Hall of Williamsburg

The sound of Italian horror is just as important as its garishly beautiful visuals. Dario Argento’s psychedelically gothic blood baths are justifiably celebrated as the epitome of Italian horror excess, but one wonders if his status would be as exalted if it were not for the crucial contributions of premier prog- rock collective Goblin and their all-out sonic assault. Goblin’s soundtracks for Argento’s Deep Red, Suspiria, Tenebre, Phenomena, and Sleepless, and their equally impressive work for George Romero, Luigi Cozzi, and Joe D’Amato have cemented their formidable reputation in the hearts, minds, and ears of horror connoisseurs. The shifting line up of Goblin has seen various combinations, off shoots, and competing versions of the band play concerts and record, but Goblin has never been fully experienced live in the U.S. until now. Second only to The Beatles’ arrival on American shores, the Goblin tour (featuring original members Claudio Simonetti, Maurizio Guarini, and Massimo Morante and youngsters Bruno Previtali on bass and Titta Tani on drums, accompanied on some songs by a feral interpretative dancer) has induced a frenzy amongst horror music fans. For their sold out show at the new bohemian capital of the world Williamsburg, Brooklyn, the power of Goblin conquered the jaded, cynical, bearded New York audience. Openers Secret Chiefs 3 (led by Faith No More/Mr. Bungle’s Trey Spruance) set the occult mood with an intense set that included a wall shaking rendition of John Carpenter’s deathless Halloween theme and a tribute to the master Ennio Morricone. Soon after, the mighty Goblin hit the stage commencing an audio/visual overload dazzling through volume, virtuosity, and European cool. Seeing Simonetti come out wearing the silver mask from Demons set the tone immediately. The journey into Italian horror began with the ominous bass rumblings of “Mad Puppet” from Deep Red and progressed through selections from Sleepless, Dawn of the Dead, Phenomena, and Tenebre (Simonetti’s use of a vocoder was brilliant as their rendition of the theme was one of many amazing highlights) as well as tracks from their non-soundtrack albums Roller and Back to Goblin. Collaged images from Argento and Romero’s films were projected behind the musicians and elevated the experience to dizzying heights of maniacal perversity. The effect of hearing these compositions live for listeners who had only previously heard them through TV’s or in theaters can’t be accurately described, but the ecstatic responses from the audience should be evidence enough of the majesty of the event. The infamous theme from Suspiria was the zenith of this ritual, with every sigh, chime, and witchy sound gloriously reproduced and amplified. Goblin even did a rendition of “Happy Birthday to You” for Massimo and made it sound fresh. Clearly, the band relished playing for the Brooklyn crowd and the audience loved every minute.

Expectations seldom exceed reality, but Goblin’s performance broke through into another dimension, thrusting the stunned audience into that wonderfully decadent giallo atmosphere. Add in the availability of a tour E.P. on blood red vinyl sold at their merchandise table, and you have the perfect Euro-cult evening. Rumor has it that the great Italian horror composer Fabio Frizzi will be making his stateside live debut in the new year. Just get Morricone to come to the U.S.and Italian horror music fans can die happily.